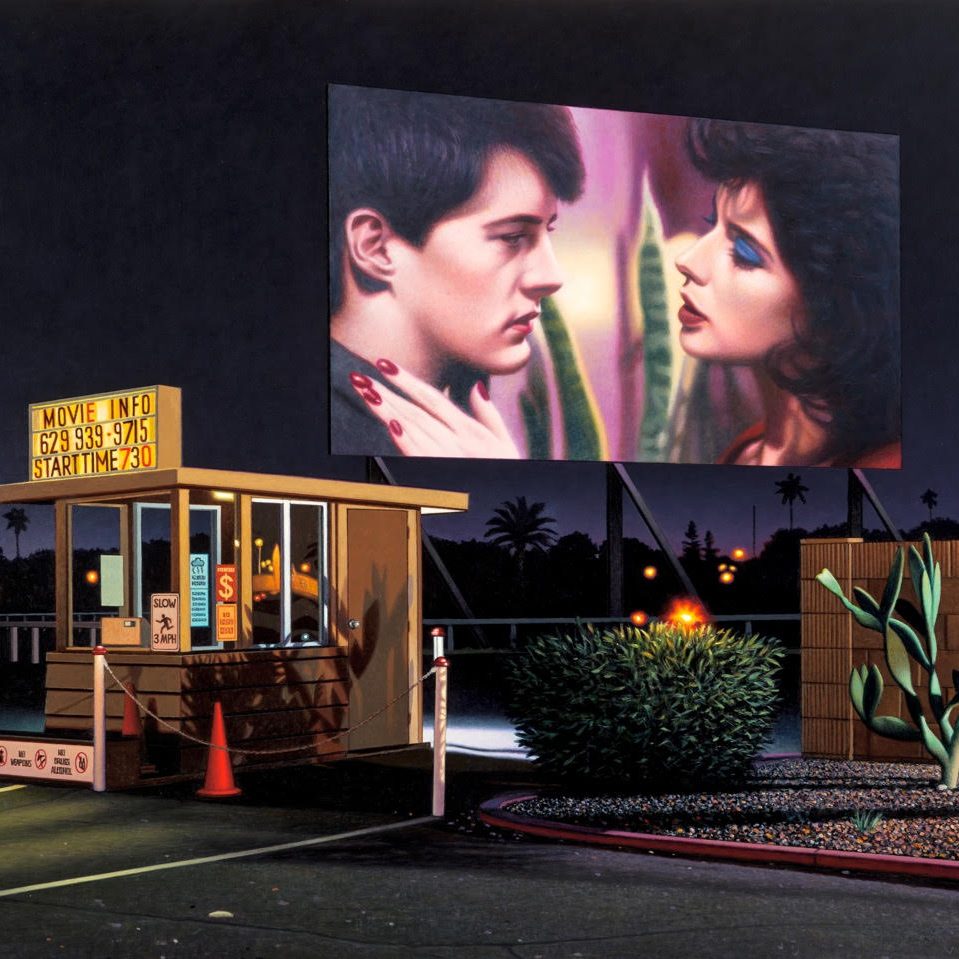 Andrew Valko, a painter living and working in Winnipeg and Vancouver, is known for his intense scenes of neon-lit motels, parking lots, drive-in theatres and lonely women in rooms—sitting, standing, lying, lost in a dreamy, often disappointed, state of mind. The artist tries to leave his paintings open-ended. He says, “I try to create episodes in an ongoing, fragmentary narrative in which the viewers are obliged to read the suggestions, clues and hint and create their own story. I like the fact that they’re multilayered and that everybody can interpret them in a different way.”

Andrew’s collection of drive-in theatres is particularly appealing, featuring large outdoor movie screens. Faces like Marilyn Monroe and Natalie Portman are projected in a landscape of palm trees and street lights. The seductive images represent the very best of the American dream—with hard work anyone can achieve whatever they want and be whoever they aim. But the artist’s portrayal here remains more critical than celebratory of that message. The glamour, the glitter hovers thinly over suburban locales. How accessible it is? Is it even real?

“There are many people inside and outside America who choose or want to believe the American Dream because it offers a great deal of hope and promise,” writes Andrew. “Hollywood often promotes these ideas in its movies and other forms of entertainment. Unfortunately, many people in America have realized that the dream isn’t quite true and they have become very disillusioned.”

The artist continues on the significance of drive-in theatres: “Drive-in theatres are icons of nostalgia, gathering places from where the optimism of America, the fast food, car and film culture has long since been drained. What is left are vacant lots of unfulfilled promises. What interested me when I started this series was not the nostalgia aspect, but the realization that these theatres were one of the first tools used for disseminating visual information, mostly manufactured Hollywood myths and popular culture, to remote communities where the audiences in awe were transported away from daily life into fantasy world.

“A predecessor to television, solar dish, and ultimately the Internet, that fulfill the same task today, the drive-in becomes a current subject. In the paintings, just like the often false myths generated by American popular culture, the juxtaposition of reality and fantasy (on the screen) creates new possibilities for ambiguous narrative that blurs the line between what is fantasy and what is reality, which can itself be seen as a response to the social reality of present day life.”

Andrew Valko was born in 1957 in Prague, Czechoslovakia and came to Canada in 1968. He received his Diploma in Graphic Design and Applied Arts from the Red River Community College in Winnipeg and studied printmaking at Yoshida Hanga Academy in Tokyo. He was elected to the Royal Canadian Academy of the Arts in 1995. He has exhibited in numerous solo and group shows in Canada, USA, Germany, Japan and Taiwan. He has done commissions for Canada Post Corporation, Royal Canadian Mint, the University of Manitoba, Manitoba Government, the city of Winnipeg, among other organisations and institutions.