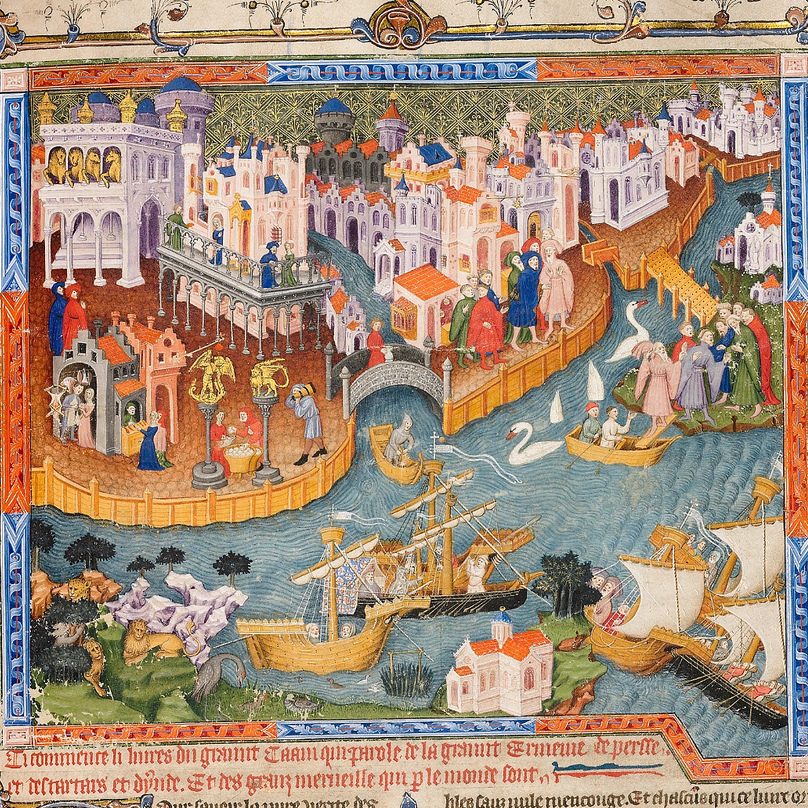 Last year, I read a beautiful little book called Invisible Cities (1972) by Italian author Italo Calvino (1923-1985) [read an excerpt in this blog post from February 2016] – a fictionalised, highly inventive, account of the meeting between the Venetian merchant traveller Marco Polo (1254–1324) and the Mongolian emperor Kublai Khan (1215-1294). Then, recently I finished The Silk Roads: A New History of the World (2015) by Oxford scholar Peter Frankopan [I have written about it on my other, hardly copious, blog] – a well-researched and very entertaining reframing of world history with central Asia as the nucleus. This one focusses on that grand ancient network of routes that facilitated the exchange of goods and ideas between the East and the West. These two reading experiences – distinct in form but thematically similar – have sparked in me a great interest in travelogues, both historical and contemporary [not very long ago, I read and wrote about a renowned Mexican diplomat’s dense and brilliant account of a lifetime of movement and constant learning].

The Book of the Marvels of the World aka Description of the World aka simply The Travels of Marco Polo (1300) is that extraordinary travelogue that has ceaselessly enthralled readers for more than seven centuries. It was written in Old French by Rustichello de Pisa, an Italian romance (heroic/chivalric literature) writer on the basis of Marco Polo’s autobiographical narratives while the two were imprisoned together in Genoa (the Italian city-states of Venice and Genoa had been at war from 1256 to 1381). In Italian, the book of Marco Polo’s travels is titled Il Milione. Some say it refers to the funny medieval opinion of travelogues being full of a “million” lies. Unsurprising, because travel tales of the time could include descriptions of figures like dog-headed men and torsos with eyes and mouths embedded in them [just see the cover of The Travels of Sir John Mandeville, a free blending of fact and fable which inspired writers like Jonathan Swift and Daniel Defoe and Samuel Taylor Coleridge]. Anyway, Marco Polo’s account, which preceded that of Sir John Mandeville, remains, as the historian Mark Elvin of Australian National University points out – although not a final witness, “in essence, authentic”. British travel writer Colin Thubron, in an introduction for the latest Everyman’s Library edition, writes:

Of all the travel sagas ever written, none is more richly astonishing than Marco Polo’s Description of the World. It records a land of such fabulous difference that to enter it was like passing through a mirror; and it is this passage – from a still-provincial Europe to an empire of brilliant strangeness – which gives the tale even now a dream-like quality. Even in its day – and for generations afterwards – Polo’s book was often regarded merely as the fairy-tale conceit of a vainglorious merchant. Only with time has its portrait of China at the height of the Mongol dynasty – a portrait rich in details which once seemed too outlandish to be believed – been largely corroborated.

So also Polo reaches beyond his immediate knowledge, his stories grow shaky with the fears and rumours of his time: with Tibetan astrologers conjuring tempests and thunderbolts, with the realm of Gog and Magog and the ruch bird which carries off elephants then drops them to smash on the ground before eating them. And black magicians effected the most famous miracle of all: the golden cups at the feast of the great khan, which levitated back and forth at his table before the eyes of the whole court.

But in general Marco Polo was hard-headed. His veneration for the emperor may have been steeped in his bedazzlement by power and riches, and the Venetian was vulnerable to Mongol myths about themselves, praising even Chinggis Khan as a paragon of kindly justice. But the esteem in which he held the great khan Khubilai was not misplaced. The ruler, by Polo’s time, had forged the largest and most populous empire there had ever been, and was attempting to unify it with a shrewd and far-sighted tolerance.

Marco Polo travelled his epic journey of 24 years through Asia with his father Niccolò and uncle Maffeo Polo – traders from a noble Venetian family – who had previously, without him, already visited Constantinople, the Crimea and China. The Great Khan Kublai had received them kindly and sent them back to Europe on an embassy to the Pope. They returned and discovered that Niccolò’s wife had died in his absence. Marco, then fifteen, had probably passed his childhood in the house of another uncle in Venice. A couple of years later, the three Polos embarked on a new journey.

Here’s a map of the roads the three Polos took, followed by a projection of Marco’s view of geography. The account has influenced Fra Mauro’s World Map [I have already written about it].

Read two passages from the book. More pictures below.

The Immoral Customs of Thebeth:

A scandalous custom, which could only proceed from the blindness of idolatry, prevails amongst the people of these parts, who are disinclined to marry young women so long as they are in their virgin state, but require, on the contrary, that they should have had previous commerce with many of the other sex; and this, they assert, is pleasing to their deities, and that a woman who has not had the company of men is worthless. Accordingly, upon the arrival of a caravan of merchants, and as soon as they have set up their tents for the night, those mothers who have marriageable daughters con duct them to the place, and each, contending for a preference, entreats the strangers to accept of her daughter and enjoy her society so long as they remain in the neighbourhood.

There are manufactures of camlet and of gold cloth, and many drugs are produced in the country that have not been brought to ours. These people are necromancers, and by their infernal art perform the most extraordinary and delusive enchantments that were ever seen or heard of. They cause tempests to arise, accompanied with flashes of lightning and thunderbolts, and produce many other miraculous effects. They are altogether an ill-conditioned race. They have dogs of the size of asses, strong enough to hunt all sorts of wild beasts, particularly the wild oxen, which are called beyamini, and are extremely large and fierce. Some of the best laner falcons are bred here, and also sakers, very swift of flight, and the natives have good sport with them.

The Court of the Grand Khan:

In the middle of the hall, where the grand khan sits at table, there is a magnificent piece of furniture, made in the form of a square coffer, each side of which is three paces in length, exquisitely carved in figures of animals, and gilt. It is hollow within, for the purpose of receiving a capacious vase, shaped like a jar, and of precious materials, calculated to hold about a tun, and filled with wine. On each of its four sides stands a smaller vessel, containing about a hogshead, one of which is filled with mare’s milk, another with that of the camel, and so of the others, according to the kinds of beverage in use. Within this buffet are also the cups or flagons belonging to his majesty, for serving the liquors. Some of them are of beautiful gilt plate. Their size is such that, when filled with wine or other liquor, the quantity would be sufficient for eight or ten men. Before every two persons who have seats at the tables, one of these flagons is placed, together with a kind of ladle, in the form of a cup with a handle, also of plate; to be used not only for taking the wine out of the flagon, but for lifting it to the head. This is observed as well with respect to the women as the men. The quantity and richness of the plate belonging to his majesty is quite incredible. Officers of rank are likewise appointed, whose duty it is to see that all strangers who happen to arrive at the time of the festival, and are unacquainted with the etiquette of the court, are suitably accommodated with places; and these stewards are continually visiting every part of the hall, inquiring of the guests if there is anything with which they are unprovided, or whether any of them wish for wine, milk, meat, or other articles, in which case it is immediately brought to them by the attendants.

Wandering in itself is merely a form of self-indulgence. If it adds not to the stock of human knowledge, or if it gives not to others the imaginative possession of some part of the world, it is a pernicious habit. The acquisition of knowledge, the accumulation of fact, is noble only in those few who have that alchemy which transmutes such clay to heavenly eternal gold. It may be thought that many travellers have given their readers great imaginative possessions; but the imaginative possession is not measured in miles and parasangs, nor do the people of that country write accounts of birds and beasts. It is only the wonderful traveller who sees a wonder, and only five travellers in the world’s history have seen wonders. The others have seen birds and beasts, rivers and wastes, the earth and the (local) fulness thereof. The five travellers are Herodotus, Caspar, Melchior, Balthazar, and Marco Polo himself.

There are, of course, several virtues to our “connectographic” age. Wide access to knowledge generates empathy and the rapidity of movement saves lives. At the same time, we can agree, there is something boring about an unrestrained flow of information and an explosion of communication across cities and countries and continents. There is little left to truly marvel at and reflect upon. An immersive reading of a glorious book like Polo’s may be exactly what we are in need of.

3 thoughts on “Book of the Marvels of the World”