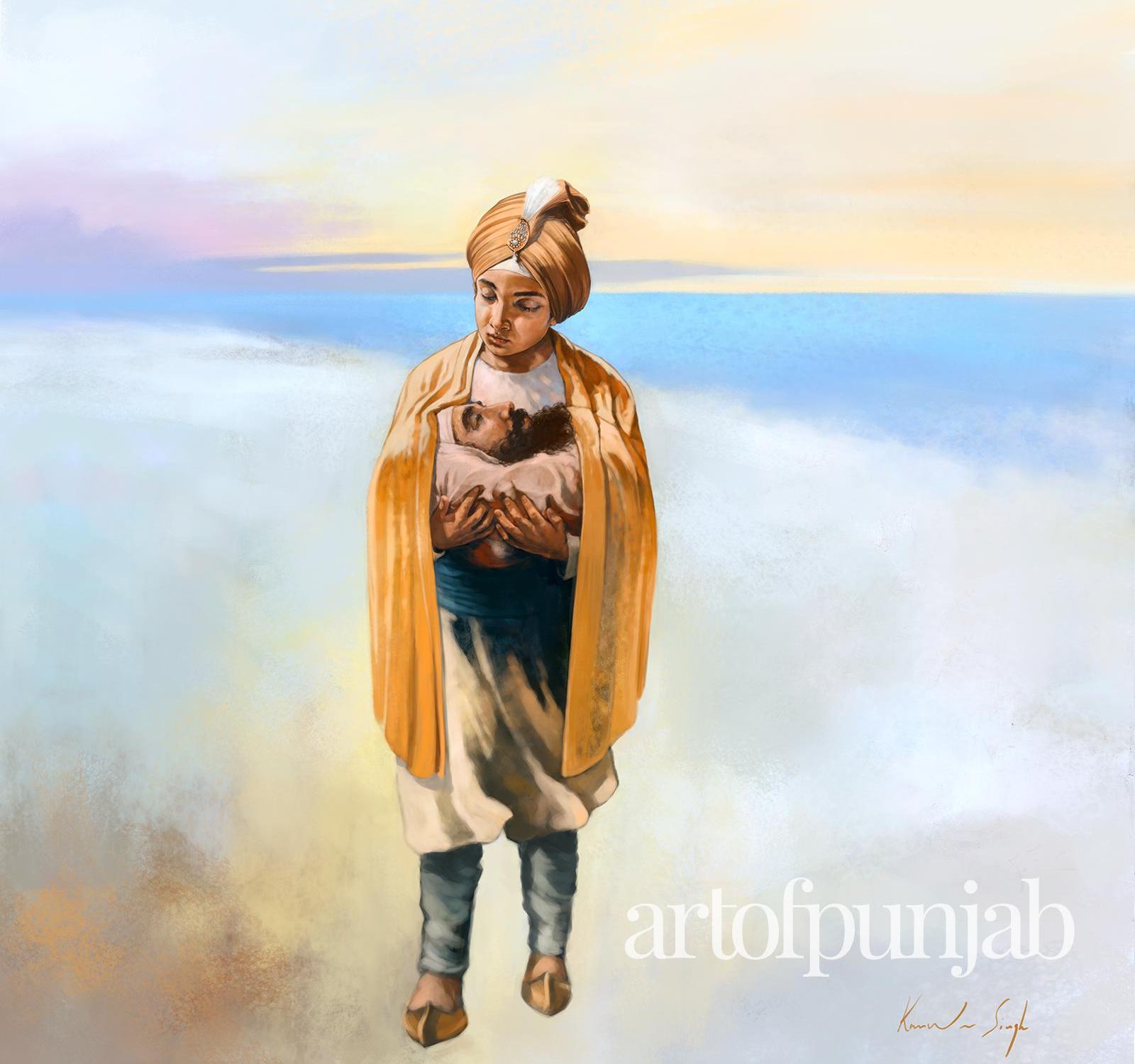 Having recently launched the first ever Sikh gallery in the UK in Slough (to the west of London), Canadian painter Kanwar Singh has been creating art dedicated to the history and culture of his religious community for the past ten years. Born in Amritsar, India (the site of the Golden Temple) and raised in Toronto, Kanwar was educated at York University and Sheridan College. Stylistically, he is influenced by a host of masters both Asian and European, including Sobha Singh, Amrita Sher-Gil, Caravaggio and John William Waterhouse.

Kanwar’s mesmerising paintings shimmer with gold, orange and royal blue. His subjects are the ten Gurus of Sikhism (Nanak Dev, Angad Dev, Amar Das, Ram Das, Arjun Dev, Hargobind, Har Rai, Har Krishan, Tegh Bahadur, Gobind Singh) as well as other great heroes and heroines of the Sikh tradition, for example, Mai Bhago (who led Sikh soldiers against the Mughals in 1705) and the human rights activist Jaswant Singh Khalra (1952–1995). Occasionally, the viewer finds portraits of Sikhs who have had prominent roles outside of India—like the Canadian soldier Buckham Singh (1893–1919) who fought in World War I as a member of the British Empire.

The artist’s aim is to envision and spread awareness of the grand historical narrative that offers daily inspiration to so many Sikhs both in India and around the world. He hopes that his work will motivate young Sikhs into the arts and make non-Sikhs appreciate Sikh culture. “Only by learning,” says Kanwar, “can we break down barriers.” On the practice of painting, he states: “Painting is a way to stop a moment in time and share it with generations to come. You look at a painting today as Sikhs years from now will but due to our shared heritage you feel the same thing and in that way you achieve a connection beyond time. That connection is the joy which moves me to create.”

Kanwar had his first exhibition in 2007 at the Sikh Centennial Foundation Vaisakhi Gala in Toronto. A decade later, during the opening ceremony of Sikh Heritage Month, the honorable Linda Jeffery, Mayor of Brampton, unveiled his newest artwork to an audience of dignitaries at the Ontario Legislature. April has been proclaimed as Sikh Heritage Month as the Province of Ontario recognises the important contributions that Sikh Canadians have made to Ontario’s social, economic, political and cultural fabric. Kanwar’s newly launched gallery on the other side of the Atlantic is intended to be a tourist attraction and will operate under regular hours from 2018 onwards. This December it will be open on the 25th from 4-7 PM and on the 31st from 6-9 PM. You can learn more about the exhibition at withoutshapewithoutform.com.

A few paintings are featured below with descriptions. The entire collection can be viewed on artofpunjab.com/shop.