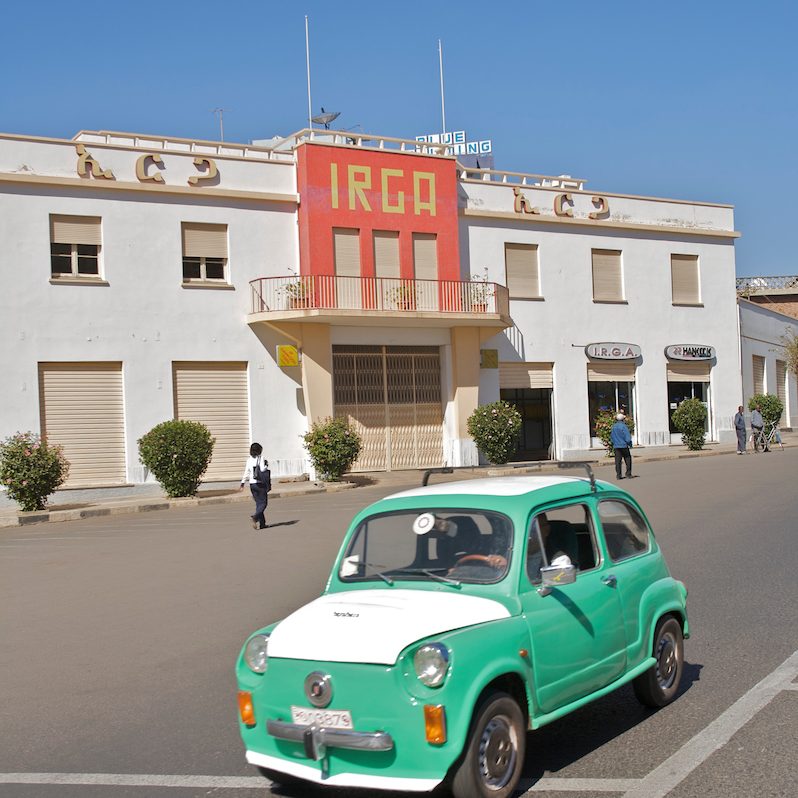 Did you know that Eritrea – that little country in the Horn of Africa – was an Italian colony from the 1880s to 1940s? I didn’t – until I discovered a wonderful collection called “Asmara, the Frozen City” by French photographer and journalist Jean Robert. Going through the pictures, I found a villa named Venezia, a cinema called Dante, macchiatos and cappuccinos…all in a most interesting mingling of cultures.

“Have you ever heard of Asmara before?” asks Jean. “In the 1930s, this capital of Erythrea, that tiny and secret country of the African Horn, was the most modern city of Africa and it’s still one of the most entrancing cities of the Black Continent. For many travellers it’s a big surprise to discover a slick city crammed with architectural gems, a showcase of the Art Deco, Cubist, Expressionist, Functionalist, Futurist and Neoclassical architectural styles.”

The photographer shares some history: “Mussolini and his fascist government who aimed to annex the neighbouring country of Ethiopia developed Asmara between 1934 and 1940, expending enormous funds. The city, which is situated at an altitude of 2400 m, was even called ‘Piccola Roma’. The most developed city of the continent emerged as a result of large scale urban planning and the latest architectonic inventions built by talented young Italian architects. The Italian population was increased from 4000 to 70,000 at this period and the native population doubled to 200,000.

“Isolated for nearly 30 years during its war against Ethiopia, Asmara escaped both the trend to build postcolonial piles and the push towards developing world urbanisation. Today Asmara remains a model Art Deco town. Since 2005, an official application for status as part of the UNESCO World cultural heritage programme was under assessment [finally granted in July 2017]. In Erythrea, one of the poorest countries in the world, times are hard but good-natured hedonism inherited from Italia has not vanished in Asmara. As in Italy, the Asmarinos (inhabitants of Asmara) hardly miss the daily ritual of ‘passeggiata’. All terraces and cafés fill up with chattering locals, sipping cappuccinos and macchiatos and promenading up and down Harnet Avenue. Women are dressed to kill and the elegant, classy gentlemen are wearing well-cut suits, sunglasses and Borsalino hats!”

Jean Robert has been capturing the Earth’s natural diversity on film for the past 20 years. He has visited over 100 countries in the past ten years. He is currently in charge of the travel section of Terre Sauvage, the biggest French magazine about nature. He travels more than 10 days each month in a different country looking for nature, ecotourism or outdoor subjects. He has reported on the effects of Chernobyl on the environment, worked on the problems of arsenic poisoning in Bangladesh and climbed Mount Kilimanjaro, Mount Kenya and Mount Rwenzori to shoot the last snows of Africa. Jean is also the author of the two books Les plus beaux voyages nature and 25 Stunning Journeys in Nature “which allow armchair travellers to join his planetary odyssey”.