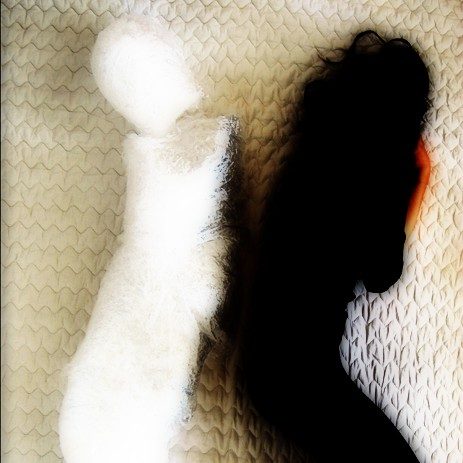 “I left home to become An-other to you” – US-based Korean artist Nayeon Yang introduces her practice with this mysterious sentence. She explores, what she considers, the inherent and inevitable subject-object [self-other] relationship through her works. How does “I” differ from “You”, “We” differ from “They”? How do distinctions give rise to connections? Nayeon is interested in the boundaries that create identity. At what point do the self and the other deviate from each other? At what point do they meet? Such questions are explored through performance, installation, video, gestures and interactive art.

Nayeon creates various encounters in her projects that bring out the contrast between the self and that which is not-the-self…it could be the surrounding (for instance, the artist is kept in a transparent box in the wintry woods), it could be a non-living thing (as in the artist sleeps on a bed with an inanimate partner behind her), it could be a stranger (example, the artist spends time in eye-contact with other people).

Nayeon explains: “I will continue to explore my porous boundaries through frictions driven by my own desires, prejudice, curiosity, and anxiety, which may be triggered differently in different cultural and social situations, and geographical environments, in South Korea and other countries as well. This is to continue to realise my own language of ‘self’ and unlearn learned boundaries – so that I can point out what I unlearn ‘about’ through my work.”

Nayeon Yang was born in Chuncheon, South Korea in 1983. She attended the Pasadena City College (2006-08), the Art Institute of Chicago (2009-11) and the Ohio State University (2013-16). Residencies include ACRE and Wassaic. Nayeon has recently exhibited in Columbus, Chicago and Kyeungi, South Korea. She currently lives in Chicago.

Images and videos used with permission.

Nayeon writes: “I was in a clear plastic box in wintery woods. My living body release body heat that makes the clear plastic box foggy. My body becomes gradually invisible. As my body states its presence, I become removed.”

Nayeon writes: “It is one of the old works and statement that A Grapefruit evolves from. My performance of wrapping my body, cutting the wrapped body, and placing it next to my body directly connects my presence and being present, the promised death, and boundaries and being bounded. Yet, this was when I did not recognize what boundaries were upon me.” 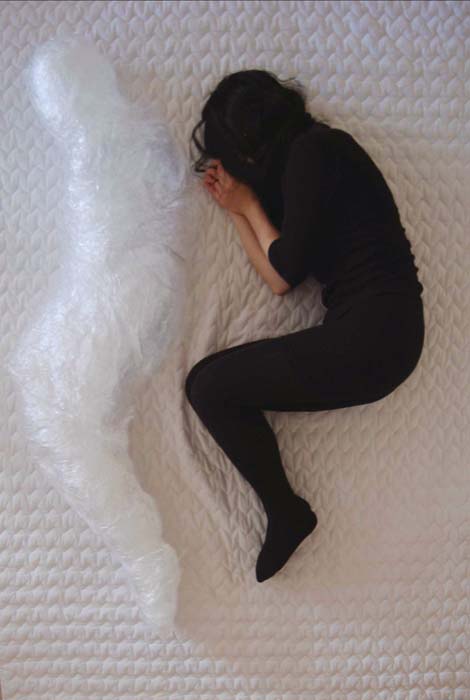 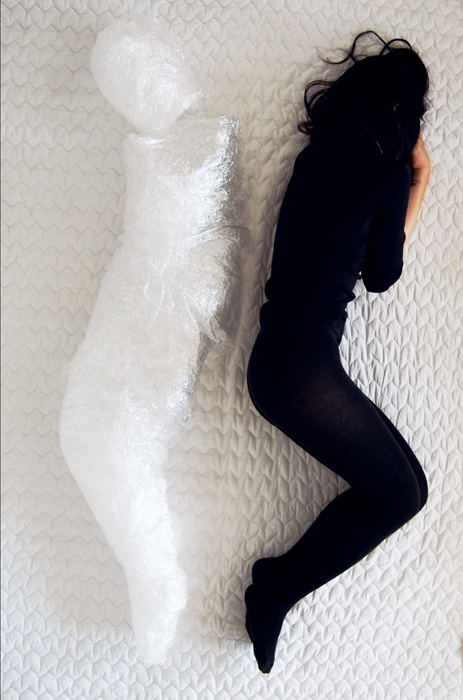 Nayeon writes: “In a pitch-dark space, there are 3 aisles made of plastic draperies. A life-size mirror is placed at the end of the aisles, where the light comes from. In this space, no more than 5 people are allowed to have the best experience of the piece.

“Also, as they walk, the temporal plastic walls remotely wave around the audience, responding to the movements of the air the audience makes. Also, the audience may see others as ghostly figures through the opaque wall from the benches. In this way, the audience may be able to sense presence of others who that interact with and share “my” boundary, ‘my’ space.” 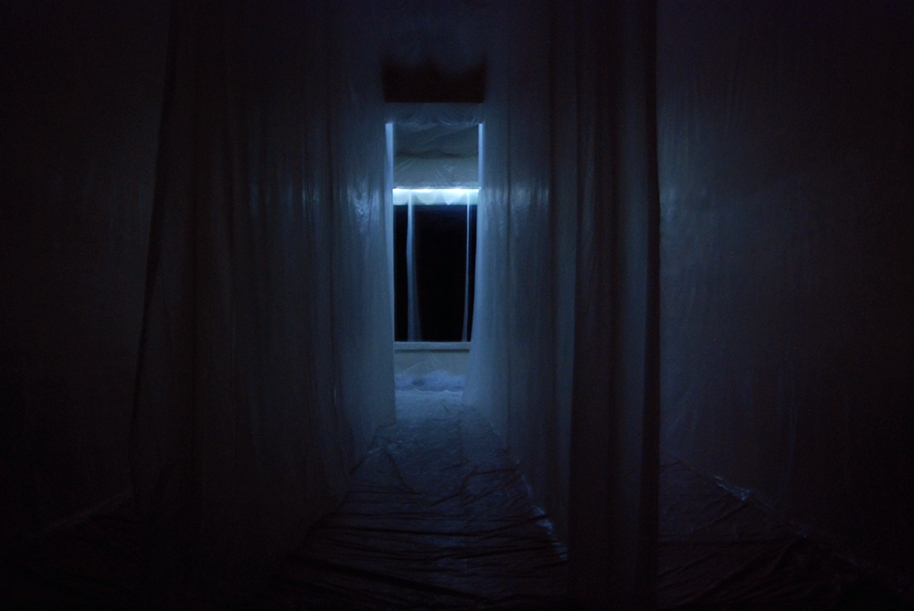 Nayeon writes: “A Grapefruit is an object composed of a grapefruit and plastic wrap. It is approximately twenty-two inches in diameter and is an imperfect sphere placed on the floor. A Grapefruit takes command of the space it occupies as isolating itself from its surroundings. The accumulated, transparent, thin plastic wrap bound around a grapefruit creates a yellowish color and a soft and slightly gluey texture. The surface of layers and layers of plastic reveals only more of plastic film underneath it, bouncing reflections back and forth.

“A grapefruit, the core material, is invisible from the surface, which was wrapped around until it grew into what it is now. The grapefruit might be decaying or mummified. The viewers would imagine the present state of the grapefruit based on their knowledge, but they have no opportunity to confirm it. The contrast between what is verifiable and what is only indicated makes the grapefruit absent and present, raw and refined. It is the interior and exterior of the object at the same time.”

“A Grapefruit is composed of a grapefruit and plastic wrap. It is approximately 22 inches in diameter. The accumulated, transparent, thin plastic wrap bound around a grapefruit creates a yellowish color and a soft and slightly gluey texture. The surface of layers and layers of plastic reveals only more of plastic film underneath it, bouncing reflections back and forth.” 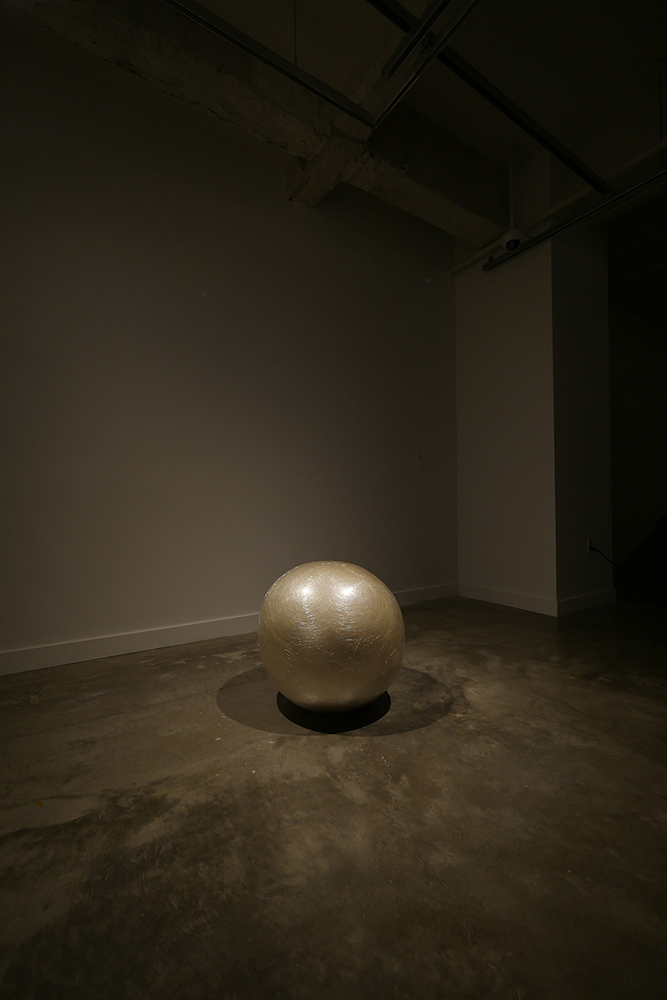 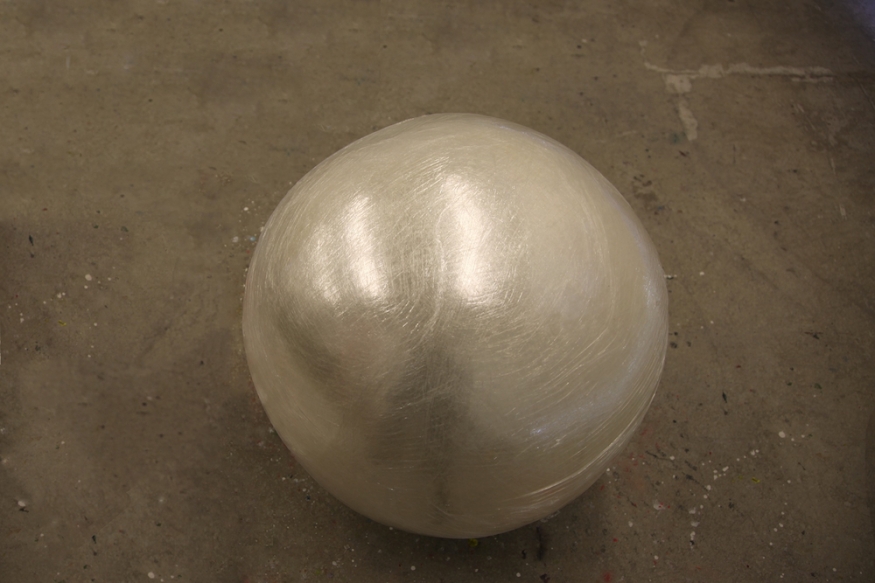 Nayeon writes: “If the Earth is Too Flat to be Round is an interactive three-channel video installation using live-feed videos. The space arranged in a U shape with three walls is capped by a half-size, freestanding wall, which closes the space and makes two openings at both sides of the wall to the space. A silver mirrored Mylar film covers the entire floor, giving soft reflections. Three projections occupy the three connected walls, lighting up the space in cool white light that is approximately 5500Kelvin.

“Once viewers enter the space, everything changes.

“In the space, viewers encounter their own images on projections turning away from their gazes and expectations. This makes the viewers keep looking at and for the images of themselves as if they needed to confirm their presence through the reflections. This condition also makes the viewers not look at the others around them even though they acknowledge the others’ presence in the space. Therefore, the others become invisible to “me” [the viewers’ selves].” 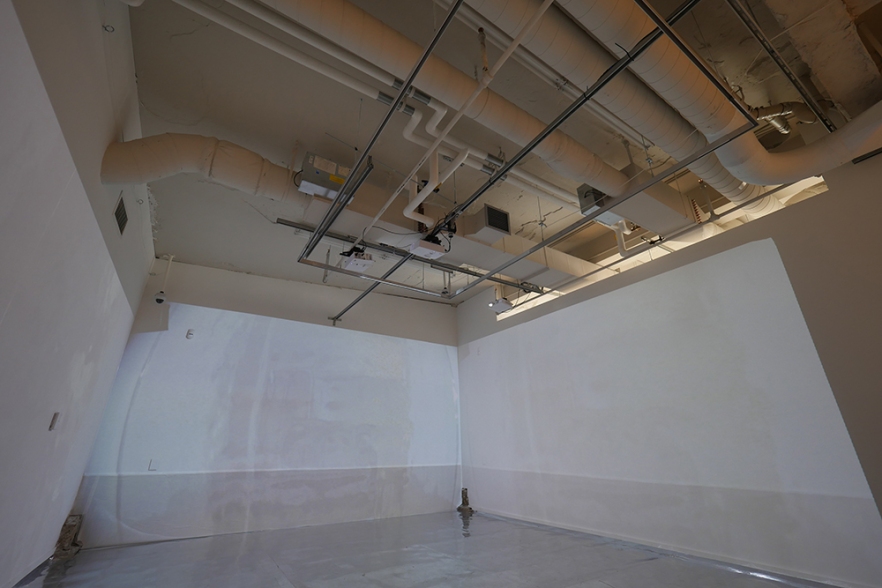 Nayeon writes: “A Standard  Woman is 45-second, one-to-one performance / communication happening in public. During the project, people are invited to perform with me; a participant and I make straight eye contact and smile for 45 seconds, holding each other’s hands.

“Are we even now?” I keep checking at the mirror, stepping on bricks, bending my knees, or sometimes tiptoeing for forty-five seconds to make our height even and straight eye contact. At the end of the performance, I take a picture of our performing bodies. Each picture is sent to the participant to remind her or him of a memory of a standard woman in a different view of the event: The memory of how she was made for 45 seconds, beside memory of making straight eye contact and holding hands for 45 seconds.”

Nayeon writes: “It is an interactive multichannel live-feed video installation. 2 projections on the white floor and 4 layers of curved sheer fabric screens occupy the exhibition space. The sheer fabric screens divide the space into inner and outer spaces, where an audience may have different visual experiences. Projection images are created within the space and show physicality of the space itself captured from the live-feed video cameras. When there is no audience, the projections are virtually empty.

“In the outer space, the audience witnesses unidentifiable layered shadowy images of people in inner space on the screens. In the inner space, the audience is able to interact with the piece in active ways as engaging with duplicated projections of self. The floor projection in the inner space creates radial images of the audience like kaleidoscope, and the projection on the screens display upside-down view of the space, including the floor projection. Through Orbital Inclination, I explore a metaphoric space of “I” (the center that is not the center) that is loose yet grounded, and open yet limited in one’s body and its environment. Through the project, I query how “I” positions self in relation to others and explore centered structure.” 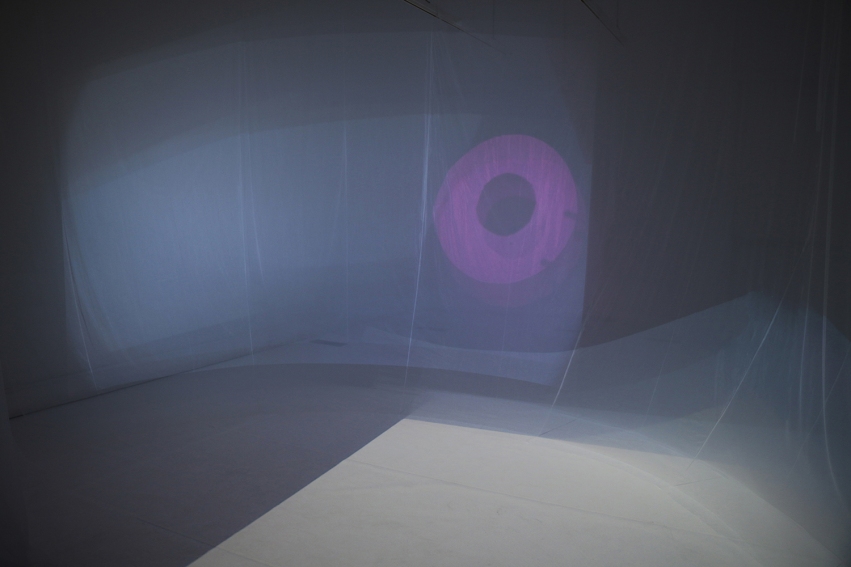