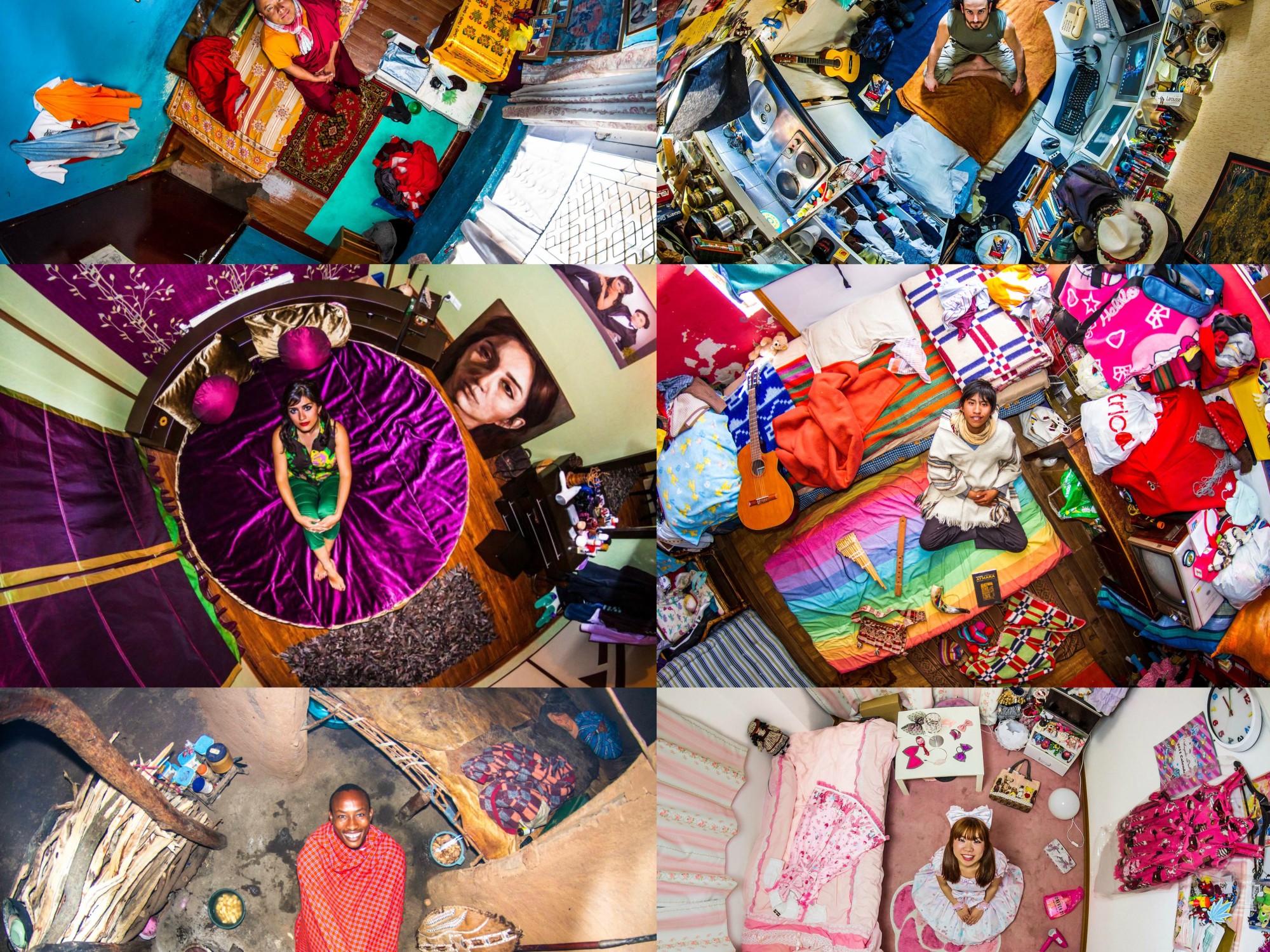 Born in South Africa and based in Paris, John Thackwray is a filmmaker and photographer who has directed television ads for brands such as L’Oréal, Sony, Coca Cola, and music videos for various artists. Dedicated to human rights and development issues, he divides his time between shooting, exhibitions and conferences in countries all over the globe.

In 2010, John started his long-term “My Room” project. The concept is simple – photographing young men and women who were born in the 80’s and 90’s, in the places they sleep, all around the world, and interviewing them about lifestyle, local issues, education, religion or love. While some of the photographs may look a little staged, they manage to convey authenticity. All are stunning in their ordinariness. John captures everyone with great heart and respect.

“It naturally started with my friends in Paris,” says John, “and little by little the project became bigger. More than a thousand candidates from 55 countries have already participated.  Some are rich, some are poor, some live in a traditional way, while some choose the modern lifestyle. I have been committed to documenting lifestyles everywhere – from a Buddhist temple of Nepal to a native American reservation, from a jail in Mexico to Palestinian refugee camps.” The project went on to be sponsored by UNICEF, Gautier, Ipsos, Gallimard and Central Dupon Images. John mentions that he has been influenced by persons who are “not photographers”, especially Gregg Popovich, Hideo Kojima, Viacheslav Fetisov, Daniel Cohen. But Nelson Mandela, for his devotion and his integrity, inspires him the most.

How did he manage to gain access to the bedrooms? John answers: “Convincing people took me 95% of the time, my shooting time was actually very short. There are different ways to approach people and stay in the safe zone. I use social networks, work with several local NGOs and sometimes directly ask people on the streets, but that is rare. In every new country I need to quickly establish a safe network of trustful people who understand what I’m doing and are ready to help me.”

While documenting millennials, what are the similarities that he has noticed? The photographer says: “Most of them share an access to the Internet and presence on social networks,  including young Saudi women and farmers in the African bush. This is definitely the connected generation, allowing me to stay in touch with most of them.”

What are the major differences that he has come across? John says, “The biggest, unsurprisingly, is the language. There are more than 6000 spoken languages in the world. That made the realisation of the project really hard. Even though I could usually find an English speaker to help me in translation, the difficulty to communicate fluently with the people I photographed was extremely frustrating. There are some questions for which I will never have replies. Sometimes, people can’t even understand each other across the immediate border, such as French and Germans or across the 4000 km long Russian and Chinese border. Apart from language, the other main difference across cultures, in my mind, is the perception of the family. In some African cultures, the father is the chief. He’s the one who gets respect and takes the decisions for all the members. In other cultures, mainly in the Western world, the kids are the centre of the organisation. Western parents make lots of sacrifices for them. They somehow, in a non-direct way, rule the institution of the family.”

Does John have a personal favourite photograph or story? He explains: “At first, I was more attracted by the beauty of the photos, the composition, the colours. But little by little, I started to focus more on the stories. Now, for me, the best photos are the ones with the strongest stories. The portraits of young Syrians living in Lebanese refugee camps were really sad. They lost everything during the war. Same as the Rwandan youth who had lived through the 1994 genocide as children, telling me how they lost all their families. Photographing prisoners in the jails of north Mexico where people talked about redemption was a strong experience too. Furthermore, I have an Iranian youth in my heart, who has been fighting for freedom. Over there, participation in my project was a political act. Then I was impressed by the spiritually of India, the hospitality of Russia, the craziness of Japan.”

Finally, what has John learnt? He says that many people confuse poverty and violence. “Poor communities are not necessarily violent, and violence is much harder to live with than poverty, especially for young women. They are the first victims of it. For example, in certain communities, they cannot step out of the house during the night.”

You can follow John Thackwray on his website (myroomphotos.com) and Facebook page (www.facebook.com/myroomphotos). A compilation of the hundred most representative photos from the project that shows the rooms and includes testimonies of the inhabitants will be available in the form of a book (French and English) before Christmas 2016. You can pre-order it here. John is working towards more translations. After “youth and geography”, he thinks he would like to explore “love and history”.

One thought on “My Room”