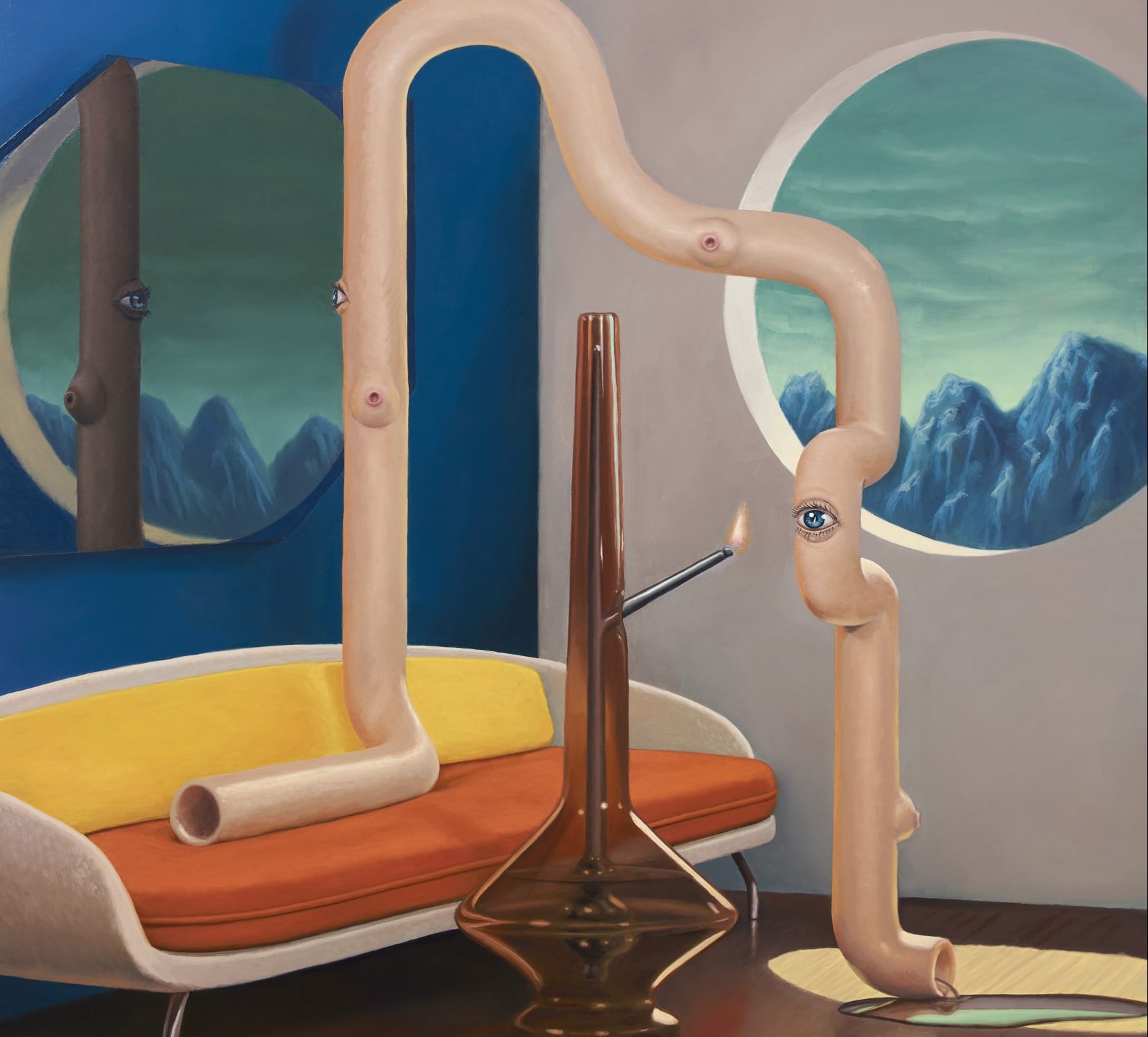 Brooklyn-based artist Jeremy Olson was earlier into kaleidoscopic portaits, in which he would place fragmentary parts over the face of his subject. Interestingly, over time, his practice took a very unusual turn. He now paints characters that are at once haunting and humorous—they are reduced, like remnants, with features that may be human or animal. Dental imagery takes on a flesh-like appearance while figures resembling knots of hair contort and writhe before the viewer.

We do not know the place and period wherein these figures exist. Sometimes the impression one gets is that of a post-apocalyptic, dystopian situation with weird mutations. From another perspective, the figures appear to be symbols of what has always existed everywhere—deep-rooted fears, elemental unreason. The artworks often have titles with words that sound biologically and psychologically primal—“amniotic”, “chthonic”.

For his recent exhibition “the likes of others”—that ran from January 6 to February 13 at Unit London—Olson continued to delve into darker aspects of the human condition, particularly into loneliness as it is experienced in a hyper-connected world.

Through a cleverly deployed cast of anthropomorphic characters, the artist captured what it feels like to be human in a digitised society. He grasped the asphyxiating uncertainty, the shackling vanity and vapid materialism, laying it out for the viewer to engage with in a moment of catharsis, a moment that would turn a bleak subject matter into something lighter, more optimistic, even comforting. Wrapped within a sense of deafening alienation and staring into the abyss of a future that looks cancelled or unpromising, these characters make one think as they entertain. They are caught before mirrors, on holiday, seated within their pods, in moments of confusion or helplessness.

Unit London adds more: “In the likes of others, Olson’s characters are compound beings comprised of two or more distinct ideas: a pipe and a woman, a face and a tree, a fox and a snake. They come together in varying combinations and achieve differing degrees of familiarity. Their aim is to bridge what the artist perceives as an empathy deficit in contemporary society. Through being familiar but not personally recognisable these surreal, often rather grotesque creatures, allow the viewer to connect with the work in a more profound way—redolent of when we recognise relatable emotions in animals. The depersonalisation of these beings elicits a more personal response; the viewer can connect in the kind of emotive way that is commonly thought of as lacking in contemporary society.

“Olson’s characters are liminal, existing on the boundary between one state of being or another. Much like our own, their existence is a precarious, rootless one that plays out in sometimes daunting, always decaying surroundings. They often have a disarming aesthetic, rendered like a character from a children’s book or, more appropriately, a digital avatar. Olson is interested in whether this stylistic decision enhances the empathetic connection between viewer and subject, or whether it entrenches previously ascertained negative views.”

Born in Ojai, California, Jeremy Olson received his BFA from the University of Arizona and an MFA from New York University. His work has been exhibited in New York as well as Antwerp, Berlin, Connecticut, Melbourne, Omaha, and Seoul. He has participated in residency programs in Florida, Nebraska, New York, Oslo and Michigan.