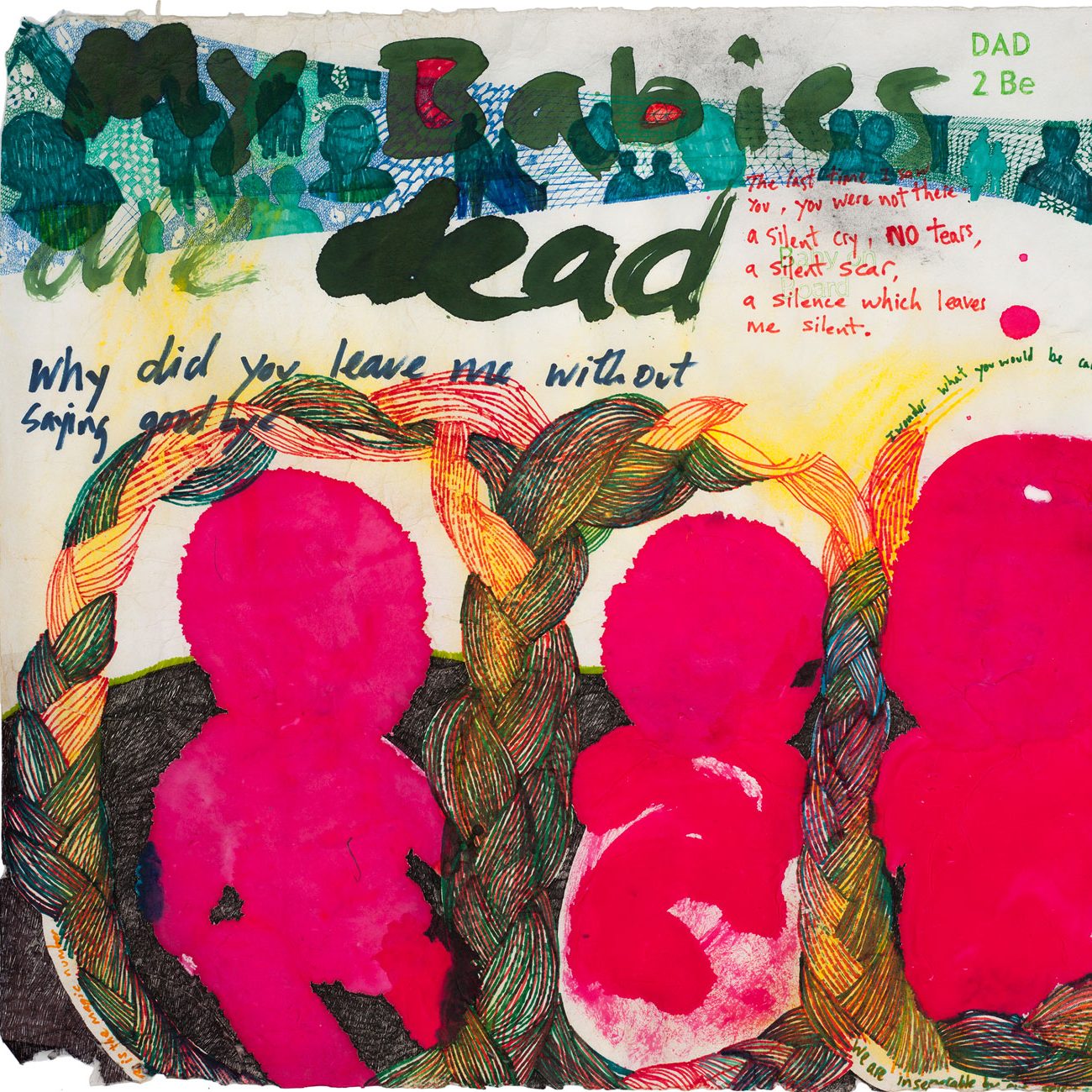 It is strange that a grief as ubiquitous and severe as pregnancy loss still remains a taboo subject in our time. The fact that the miscarriage experiences of two female celebrites gained so much attention last year—Chrissy Teigen sharing her hospital images on Instagram in September and Meghan Markle’s New York Times article in November—was proof that these expressions were unusual. The vast majority of women who go through the event still find it hard to articulate and share their state of mind and heart. Apparently, there aren’t many spaces in society as yet, private or public, into which the weight of this loss can be confided or contained. No ritual acknowledges and marks it.

If utterance is hard for women, it is even harder for men. London-based artist Andrew Foster shed light on this important issue a few years ago. After two successful pregnancies, Andrew and his wife lost three children within one year. He turned his bereavement into a massive painting titled “Pain will not have the last word”. The artwork explores the everyday experiences, the trials and joys of being a dad and also celebrates the three lovable brief and tiny lives.

The artwork opens with the babies rendered in dark pink, kept safely within baskets. Notes are scribbled around: “My Babies are dead”, “DAD 2 Be”, “Baby on Board”, “Why did you leave me without saying goodbye”, “I wonder what you would be called, what you smell like”, “The last time I saw you, you were not there. A silent cry, no tears, a silent scar, a silence which leaves me silent.” Initially, the painting explores the birth of the protagonists and the dark veneer of the perfect world. It then progresses to a cheerful narrative that includes looking for Easter eggs, going to the fair, playing hide and seek, playground fun, cowboys and Indians, receiving presents at Christmas, sledging in the snow to going on holiday.

“This work reflects that I am a father of two wonderful healthy kids,” says Andrew. “I could not have created the work without the experience of being a dad. The scroll narrative and related work reflects the trials, joys and complexities that I discovered while helping to bring up my two kids. It is these experiences that is the light to the shadow of my miscarriages. My experiences helped me celebrate this double-edged sword. I do not see this work as sentimental or depressing but an artwork that has an authenticity, integrity and a tenderness that breaks down the perception of who experiences miscarriage.”

“We never assumed anything would go wrong,” he adds. “Your head starts to go into overdrive and you start to make plans. I didn’t know what to do or say after our miscarriages; I was just numb, devastated. I was surprised how little people asked me how I felt at the time, yet they say, ‘How’s your wife?’ The assumption was that the pain was only going on with her, not with me, and I felt very vulnerable as a man talking about a ‘woman’s’ issue. It’s amazed me that people have since said, ‘Of course it’s a male issue–take ownership’. As a man I was devastated by what had happened and also by peoples lack of awareness that both the wife and husband are affected by miscarriage. It was as if miscarriages only happen to women. It’s not a competition for attention but indicates a social and cultural lack of awareness that men also go through this process.”

“Pain will not have the last word” started out quite innocently one afternoon and became a major piece of work that took two years to complete. Andrew didn’t set out to make an epic work, it was simply a point of liberation. The unusual format, fragile paper and “stupidity of scale” gave him the opportunity to play with his three children. It never felt like a burden or pressure but a safe space where he could spend time. In hindsight, he believes this work challenges the perception that miscarriage is only a female issue.

Another interesting work of Andrew’s with strong content and colourful aesthetic is “Precious in thy sight” that refers to the family meal table. This painting celebrates the emotional friction of daily family life and rejoices in its relationships and the individual’s needs. It demonstrates a growing togetherness, strong love and the preciousness of the family. Its symbolism relates to the ordinary being extraordinary. The imagery is inspired by Leonardo da Vinci’s The Last Supper, The Wizard of Oz, children’s toys, being a parent, biblical narratives and Andrew’s own underwear fetishism within the everyday. An atheist, but brought up to believe in God, Andrew has a curiosity and growing intrigue with the Bible, its narratives, characters and messages. The title of the painting comes from Isaiah 43:4:

Andrew obtained an MA from Central Saint Martins School of Art and Design in 1994. In 2014, he was awarded an Honorary Fellowship from the Hereford College of Arts. He has been a guest speaker at several art institutions in the UK. His work has been part of the “Fertility Fest”, a one-of-a-kind art festival dedicated to fertility, infertility, reproductive science and modern families.

See the remaining sections of “Pain will not have the last word” below.