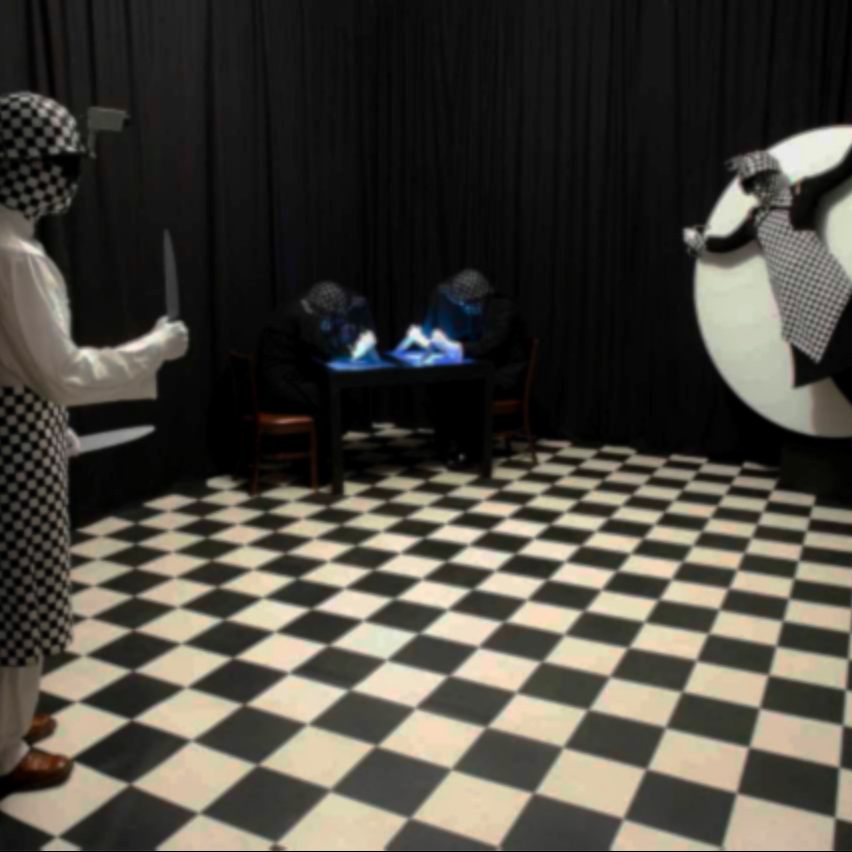 I’ve become a big fan of Hungarian artist Balázs Kicsiny, who is known for his surreal tableaux frequently featuring figures in black and white (wearing suits, aprons, cassocks) and props such as knives, helmets, chains and anchors. The theatrical characters enact complex metaphors—on confusion, navigation, violence and bondage—that could be interpreted at multiple levels—political, economic, existential…

The artist writes: “My works are constructed situations. During the time when my frozen actions are on display in the exhibition space, they are inseparable from the viewer; there is no stage, no cordon. They are at the mercy of the audience. This defencelessness encourages the viewer to be reflective. The beholder can look into the figure’s “face” as if looking into a mirror. Both of them interpret each other, give meaning to each other’s existence. We both the object of the perception and the subject of the perception, get stuck in time, forming a unity or even solidarity with each other in time and space.”

Born in 1958 in Salgótarján, Kicsiny lives and works in Budapest. He works with various mediums, from installations to videos to paintings. He graduated from the Hungarian University of Fine Arts in 1982, completed his MA in 1985 and doctorate in 2008. Between 2000 and 2004, he was a London correspondent for the Hungarian arts journals Műértő and Balkon. In 2005 he started to lecture in Budapest at the Hungarian University of Fine Arts Doctorate School where he is a professor of artistic research. He represented the Hungarian Pavilion at the 51st Venice Biennale.

One of Balázs Kicsiny’s most fascinating projects is the multimedia installation “Killing Time”, which was exhibited for the first time in 2012 at the Kemper Art Museum in Saint Louis. The installation has three components: the army, the circus and the restaurant. In all of them people are served: to protect or kill, to entertain or feed. The installation depicts how these functions are mixed up, confusing us as to who is serving who and for what purpose, and where we are in fact caught amongst these components. The installation evokes a provocative dichotomy of motion and stillness, referencing themes of time and its relationship to space and history.

The installation consists of four life size figures, dressed as “The Chef”, “The Waitress” and two figures as “The Couple”. They are standing in an area covered with sand. All the figures are dressed in specific outfits. The Chef is in white working clothes with a checkered apron. The Waitress is in a black dress with checkered collars and also with a checkered apron. The Couple are dressed in a funeral-like black suit and black dress, with white collars. All the four figures are wearing soldier’s helmets, with surveillance cameras on and protective glasses. Their face and helmets are also covered with the checkered pattern.

The Chef and The Waitress are caught in a frozen moment, whilst participating in a knife-throwing spectacle. The Chef, in the one hand holds the knife while with the other hand is poised ready to throw the knife at the Waitress. She is fixed to a rotating circular target. The Waitress’ and The Chef’s helmet cameras are filming the proceedings.

The cameras of the Couple’s helmets are filming also although covered by a funeral veil. They sit on chairs at a table. The surface of the table is made up of two LCD TV screens, which broadcast the pictures captured by the cameras of The Chef and The Waitress. The seated Couple are holding knives in both hands, the same types as the ones The Chef is using.

See some of the artist’s other projects below.