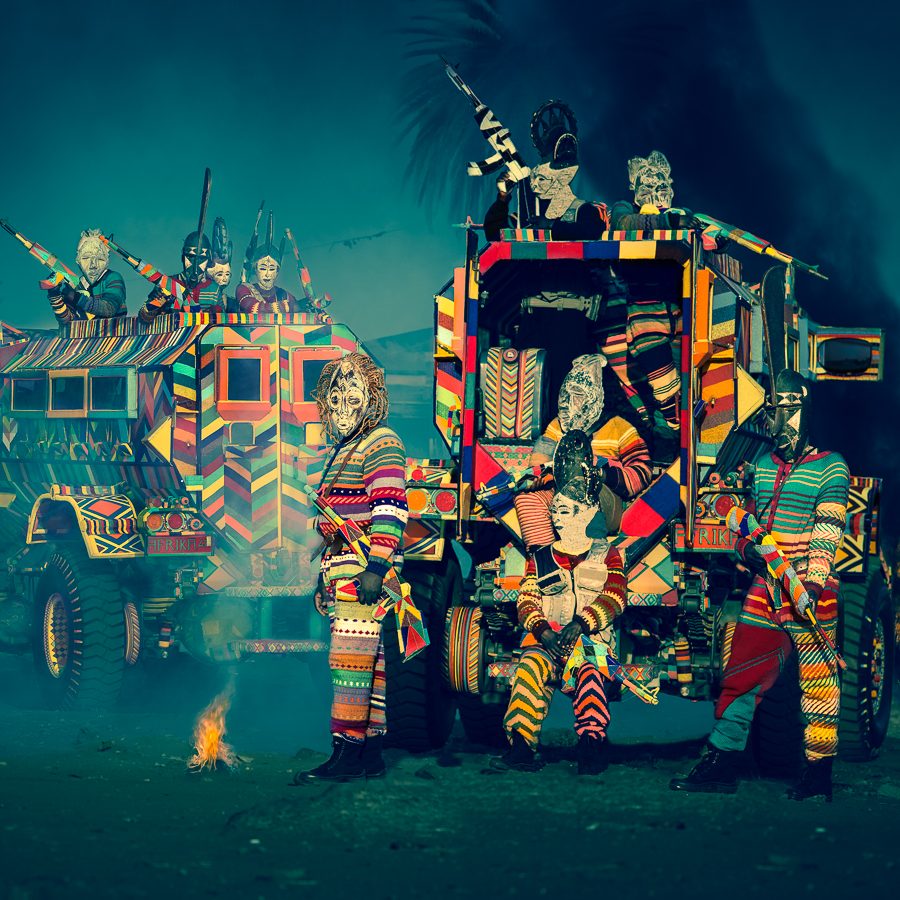 Born in Johannesburg in 1963, Los Angeles-based South African artist Ralph Ziman is motivated by a sense of social responsibility towards global politics. Using imagery that is at once vivid and dark, he comments on serious issues such as life under apartheid, the arms trade and trophy hunting.

Ralph’s work has been the subject of several solo exhibitions, at Joseph Gross Gallery in Tuscon, AZ, and C.A.V.E. Gallery in Venice, CA, as well as group exhibitions at the National Gallery in Cape Town, Museum of Contemporary African Diasporan Arts in Brooklyn, NY, and the FNP Art Fair in Johannesburg. His practice is interdisciplinary and extends across a variety of media, including film, photography, public intervention, sculpture and installation.

In this short interview, Ralph tells us more about his background and how it informs his projects…

You mention that you are committed to “salvaging and manipulating historical materials related to pan-African history”; your work “challenges the viewer to confront how cultural memory, often entangled in violence, may bear upon the contemporary”, particularly the realm of global politics. Why is the past so central to your practice?

The past is with me all the time. I cannot escape it. When I left South Africa at the age of nineteen, to move to London, I thought I was done with the country, that I had left my past behind. I skipped out days before my military call up and was classified as a deserter. Military police visited my parents’ house looking for me. In London, I was looking towards the future. I was done with apartheid, done with boneheaded, gun-toting assholes who would beat you to a pulp for looking at their girlfriends at the disco, done with braaivleis, rugby, and all the other bullshit. South Africa was bland, white, repressive, conservative and Christian. It had nothing that I wanted.

At that point in my life, I didn’t see my identity wrapped up in a sense of African-ness. London was in the throes of post-punk creativity. Music was everywhere, creativity pulsed through the place.  I started directing music videos with some success. I honestly thought I would never go back to Africa. My South African passport made me unwelcome in most of the continent, the only place I could travel was South Africa, and waiting there were a buzz cut and an FN rifle or a jail cell.

We as South Africans also need to confront our collective past. South Africa has a history of violence. A history that started long before the dark days of the apartheid. A violence persists and magnifies to this day like Hydra. It has morphed into different forms but its tail has not left us yet.

What is my culpability as a white South African? I was born into apartheid and this violence was committed in my name. I had the best the country had to offer while others were oppressed. How do I atone for these sins?

“Casspir” (2016) is all about a South African military vehicle that has a legacy of institutional oppression. You write:

For your project, you repurposed the military vehicle, covered it in elaborate, brightly-coloured panels of complex glass beadwork made in traditional patterns, completed by artisans from Zimbabwe and the Mpumalanga province of South Africa. “In the age of Ferguson and Black Lives Matter,” you write, “the Casspir has returned as a poltergeist from the past that continues to haunt us in the present.”

The final product is at once deadly and exotic. Why did you choose to turn something that is associated with violence and tyranny into something vivid and almost beautiful?

To me, the Casspir was the ultimate symbol of violence and oppression. Designed by the apartheid war machine it was a fortress of four wheels.  It carried a crew of seventeen, could traverse any environment at a hundred kilometers per hour and sported a Browning 50 mm cannon mounted to the roof. I want to view the world through fresh eyes. I want to see familiar objects in new and different contexts. In this way the mundane becomes surreal, the familiar becomes exotic. Objects can become so everyday that they are as good as invisible to us. The drab khaki Casspir is seen so often that it disappears. I want to see things again, so I can really look at them and assess my feelings towards them.  I want to dare the viewer to look away or not to look at all. Confront your preconceptions.

You have two critically acclaimed movies to your credit. One, Hearts and Minds (1995) that was brought to international attention as the first independent South African feature film to be completed after apartheid, premiering at the Berlin and Montreal International Film Festivals. Second, Jerusalema that reached critical acclaim as South Africa’s entry to the 2008 Academy Award Foreign Language section. What was the production process for you like? Also, would you recommend some other prominent South African films to those curious about your country and culture?

I am a little out of touch with South African films.  A lot of what is made these days are romantic comedies done on low budgets and tight shooting schedules. It seems that there is not a great willingness on the parts of the filmmakers to take on gritty and poignant subject matter. I believe this has a lot to do with the fact that in order to get a film made the producers need subsidies from government organisations like the National Film and Video Foundation.

None of the films I have made received any of the subsidies. The NFVF hated Jerusalema right up until the moment it started to receive critical acclaim in South Africa and then tried to take credit for helping get the film made. It is not direct government control of the industry but clearly, everyone who works at the organisation is a government appointee and as such, they toe the party line.

The series “Ghosts” deals with the international arms trade in Africa, something that sustains conflict across the entire continent. You write: “In response to the guns sent into African culture and to subvert the destructive cycle of the international arms trade, the images represent a purely aesthetic, anti-lethal cultural response, a visual export out of Africa.” This photoshoot was conducted in crime-ridden downtown Johannesburg. Tell us more about your experience…

The experience was surreal. The weapons we made were not anatomically correct. I never thought they could be mistaken for a real gun. They were brightly coloured, like toys.  But then as the photo shoot progressed it became apparent that there was a lethal beauty in the brightly coloured objects. Like in nature, when an insect is bright red or yellow it is a warning sign. Danger, poison, beware. It was a deadly allure, dark, scary and compelling.

“Bones” is about trophy hunting. In this haunting collection, you ceremoniously adorn the skeletons of endangered species—resin casts of eland, wildebeest, chimpanzee—in death masks made of colourful beads. How bad is the problem and in which part of Africa is it most common?

To know how bad it is you only have to look to the idiot sons of a deranged president. Imagine that you’ve never been outside the United States, never travelled, never seen the world beyond your doorstep. Then one day you buy a high-powered rifle, check it in on a Delta flight from Atlanta to Johannesburg (BTW Delta does not charge the normal baggage fees as a nod to the NRA). When you land you are whisked away to a seven-star resort where you are taken in a Land Rover to kill animals. For the right price, you can shoot an elephant, a cheetah, a lion or a Northern White Rhino. When you are finally standing with your boot on the dead animal’s head, it is an Instagram moment.

I got sick of seeing a bunch of Ted Nugent-looking creeps sitting in Delta Premium Economy with their bush jackets and khaki pants.

Who are your greatest influences? Any artists who have effectively depicted issues of oppression and violence whom you like?

For me, William Kentridge is hands down the best artist in the world.  He paints, draws, sculpts, makes films, produces amazing animation, directs theatre, designs sets, stages operas and on and on.  Everything he does is to perfection. I have never felt a moment’s boredom looking at his work. I am always amazed. It’s personal, poignant and transcendent.

What are you working on right now?

Currently my Casspir is at Pioneer Works in Redhook, Brooklyn. We took it there for 1-54 Art Fair. It was loaded onto a ship in Durban, South Africa and accidentally unloaded in Bremerhaven, Germany. It arrived at the Port of New Jersey without a moment to spare. What a surreal experience seeing flatbedded through the NY rush hour traffic.

Connected to the project, I have just completed the prints that are a companion piece to the Casspir. We shot several days in Kliptown Soweto, where we recreated riot scenes from the 80s and 90s. It was a big shoot with SFX and extras. Along with the photos we shot a documentary about the process of beading the Casspir and interviewed South Africans old enough to remember apartheid about their memories and recollections.

I am also editing a feature film I directed in South Africa last year. It is a modern-day adaptation of Dostoyevsky’s Crime and Punishment. It is in Sepedi and Setswana and was shot in central Johannesburg.

In addition to the photographs and films, my wife and I just hosted a big show in The Downtown LA Arts District called “Hidden Rooms”, “Art At The Rendon”. Over eighty artists activated the empty, decaying Rendon Hotel. Each artist had a room to themselves and full creative freedom to do as they like. The results were spectacular. Street artists, installation artists, fine artists, graffiti writers, conceptual artists all coming together with a sense of community and purpose. The event ran for three days in June.