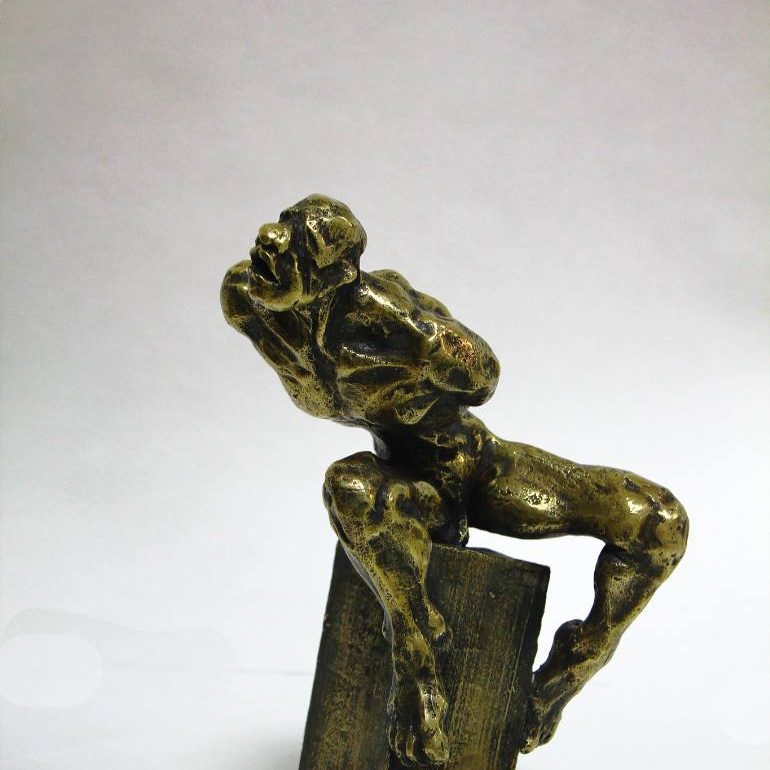 Maysan Salman (born 1984) is a Moscow-based Syrian sculptor who places the human being at the heart of his project. While he displays the bodily glory of man, he also focusses on the frailty of his spirit. The struggle and suffering of the individual frequently comes to the surface through contorted demeanour and posture.

Familiar with five languages—Arabic, English, Russian, French and Italian—Maysan obtained his first degree from Damascus University and did his master’s at the Russian Academy of Arts, where he is now studying for a PhD. In addition to Syria and Russia, his work has been exhibited in Lebanon, Singapore, the UAE and Slovakia.

Here the sculptor talks about his background, his themes and much more.

I haven’t as yet posted on any artist of Syrian origin, so this is exciting for me. I read that you were born in the coastal city of Tartus. What was your childhood like and how did you get into art? When did you decide that you must become a professional artist?

Yes, I was born in Tartus, a small Syrian city on the eastern coast of the Mediterranean sea. Growing up there was pretty exciting to say the least.  My interests in sculpting and painting began very early, at the age of 2 maybe, I don’t remember exactly. All I know is that I started drawing before speaking. My mother always supported me and provided everything I needed, from materials and space to the freedom of drawing on whichever wall I liked most in the house.

My first step into sculpture was making my own toys from plasticine. This was during difficult times when we couldn’t find many toys in Syria. Those that were available were very expensive. I made all kinds of animals and cartoon heroes. I could stay with my plasticine for hours and hours.

My grandfather was a confectioner but as a child he used to sculpt in wood as a hobby, maybe I got it from him. It’s true that I participated in many art contests and fairs for children and received some awards, but never really thought of sculpture as my profession. I was even planning to become a surgeon. Nevertheless, as a young man, it became very clear to me that sculpture was my way. So I decided to apply to the faculty of Fine Arts instead of Medical school.

You obtained your first degree from Damascus University—which is quite old, founded in 1923—and also taught at the same place for some time. Tell us about the academic environment there.

My years of study there were great. Like all college students, I was full of energy, ambition and expectations, regardless of the faculty’s problems. It is true that our university is a leading institute of art in the Arab world, but that doesn’t mean the situation was perfect. Back in the 60s and 70s, the social and academic aspects were very different. For example, you could still have a nude model. This was forbidden in our time. But somehow students would resolve such obstacles in their private art workshops.

What I liked most of all in our faculty was that we got introduced to all artistic trends. That’s why you will find that many great artists from various artistic doctrines have graduated from our very same institute.

Why did you choose Russia for further studies? I have read about a few prominent Syrian artists practising abroad—but they tend to be based in countries like the UK, Sweden or the Netherlands. What attracted you to the Russian Academy of Arts? Do you have a big community of Syrians in Moscow?

The Russian Academy of Arts is very distinguished, but for some reason we had few references to Russian sculpture in our art institute in Damascus. Being in Russia has been very good and useful for me, it has provided me with a grand addition to my artistic knowledge. But to be honest it was not my first choice. I was planning to do my higher studies in France, but this plan never saw the light as the Embassy of France in Damascus closed its doors after the beginning of the war in Syria. So as plan B was Russia, I ended up in Moscow. And frankly I believe this plan B turned out to be a fantastic experience. Russia is a very interesting, culturally rich country. Here I got the opportunity to study at the prestigious Moscow State Academy Institute “Surikov” (under the Academy of Arts), and improve my professional life both as a sculptor and a teacher.

The centre of your art is the human being. You show the human body in various situations. Difficult emotions come up again and again—fear, incapability, downfall. Is your work in any way influenced by the political situation in Syria or would you say you just try to focus on the general human condition?

Indeed, the human being and its feelings take the centre of my artwork. I’ve always worked on exposing the inner world of the individual, paying attention to the perception of the human body, trying to convey the aesthetic aspects of the strongest emotions. Projecting the sadness, weakness, fears, incapability and sometimes even the ugliness and perversity of mankind. This has been my artwork’s focus years before the beginning of the war in Syria. Of course, the unsettling situation in my country is reflected in my artworks but not in a direct way I would say.

I found “The Sea is Mine” very interesting. A man stands on a trunk with arms wide open. He seems confident and empowered, at least from a distance. What is the significance of this? Is it about migration and the freedom and prosperity that might come from it?

If you look at his face closely you will see that he is actually neither confident nor empowered, he is sad and angry. He is opening his arms to the sea itself, not to the land overseas. This sea might be his only chance, it could be his final destination, but still, this sea is “his”. The sea could be a symbol of a homeland or a grave. Migration here is not a good happy ending at all. He would not have chosen to migrate under normal conditions. This trunk-bag maybe a lifeboat, or a coffin even if he could pass to the other side.

Who are your favourite sculptors? Are you inspired by other forms of art—literature, painting, music, film, etc.?

I have many favourite sculptors, but to mention a few, I like the plasticity of Rodin’s artwork, the mind of Henry Moore, the sensitivity of Ivan Shadr. And I believe we have a lot of great sculptors in Syria. My two favorite ones are Assem Bacha and Fouad Dahdoh.

Of course, I am inspired by other forms of arts. I love to read when I have time, I like good theatre and cinema, bad stuff makes me sick. But as I mentioned earlier my main focus and inspiration is the inner self of human being itself.

I know nothing about the visual art scene in Syria. Who are some of the big names working in sculpture and painting there?

There are plenty of great Syrian plastic artists, some of them are well known in the Arab world and worldwide, others are more known in Syria and the Middle East. I cannot mention all of them and I don’t believe I’m in a position to say who is greater or better, but I’ll point out a few—again Assem Bacha (sculptor) and Fouad Dahdouh (sculptor), then Safwan Dahoul (painter), Youssef Abdelki (painter), Lutfi Arrumhin (sculptor), Mustafa Ali (sculptor), Nizar Sabour (painter), Mouneer Al-Shaarani (calligrapher), Edward Shahda (painter), Gassan Nana (painter), Ehsan Alor (sculptor), Ziad Dalloul (painter), Gayath Al-Akhras (engraver), Mohammad Omran (sculptor)…

Last year you started your PhD studies in Moscow in the history and theory of art. What is your topic and area of concentration?

I’m studying the Russian sculpture in depth, specifically the concept of heroism in the Soviet era.

Also, any exhibitions that you are preparing for at the moment?

There might be potential collective exhibitions in Moscow, Dubai and London. Nothing is confirmed yet. There is also a solo project. We’ve been preparing it for some time now and it is ready, awaiting scheduling. It is supposed to be in Beirut.