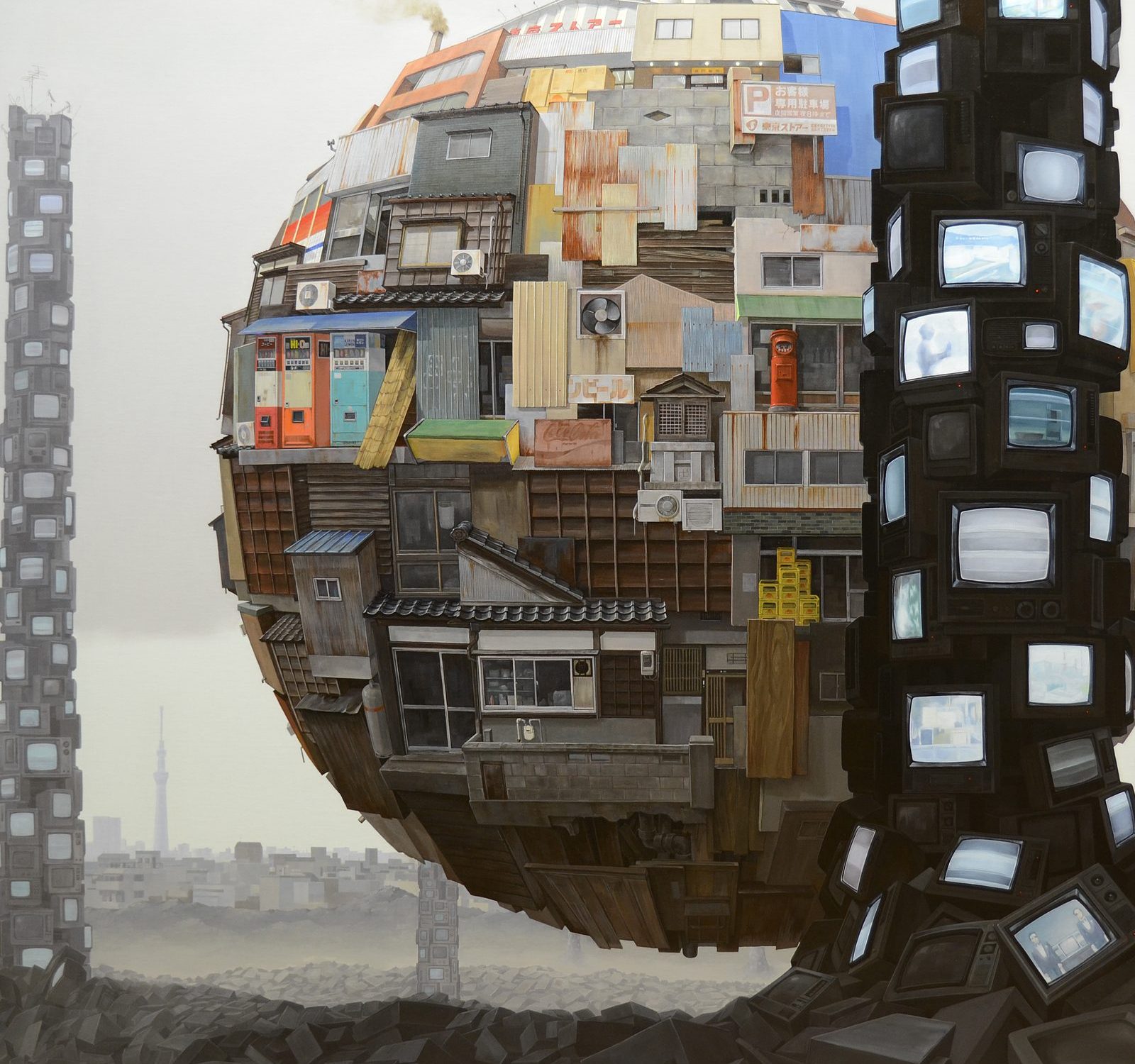 Japanese painter Masakatsu Sashie is best known for his floating orbs – strange spheres supposedly made up of concrete and steel, containing doors and windows and televisions and air conditioners. They are suspended above the real earth, which seems destroyed and barren.

Is it as if human beings have consumed all the resources that were available to them. Looks like their unrestrained capitalistic urges have depleted nature. As a coping mechanism, they haven’t (as yet) migrated to other celestial bodies but, instead, have invented mini-planets, new habitats that will protect them and give them space at least for a while.

Masakatsu explains: “In this world, both individuals and groups are engaged in various economic activities. In my landscapes, I depict the unintended influence of such economic agents on daily life.”Masakatsu was born in Kanazawa, Ishikawa Prefecture, which is known for traditional Japanese handicraft. He obtained his MFA from the Kanazawa College of Art in 2000. He is still based in his home town. “Kanazawa is like a miniature garden in which the obsolete and the modern are mixed because of its distance from urban centres,” he says. “I’ve had a lot of opportunity to consider both the sense of isolation and the tide of the times. I also grew up interested in the tiny world of diorama – Bonkei, and this may have influenced my work.”

Furthermore, Masakatsu has been interested in the concept of “the Balanced Aquarium” which appears in the book King Solomon’s Ring: New Light on Animal Ways (1949) by Nobel-winning Austrian zoologist, ethologist and ornithologist Konrad Lorenz (1903–1989).

The Balanced Aquarium can maintain its environment without using an air pump or filtration equipment. “It is a self-sustaining world, operating just with the interaction of plants and organisms living in the tank which should be left alone,” continues the artist. “Once outside involvement occurs, disintegration happens immediately, because the balance is lost. I consider this phenomenon as the epitome of the city, nation and the earth we live in.” So these floating orbs could be interpreted in that light.

“I have noticed that we are living in various kinds of aquariums and are trying to maintain the balance,” Masakatsu adds. “From another viewpoint, it might be said that the boundary of the world that people can imagine is their aquarium. I’ve came to think about how each aquarium has friction and affects other surrounding aquariums, and how the future will change those consequences.”

Masakatsu has exhibited throughout Asia and the United States and his work is included in private and corporate collection internationally. Some of the American galleries he has been associated with are Worcester Art Museum, MA, Jonathan LeVine Gallery, NY, and Merry Karnowsky Gallery, LA.