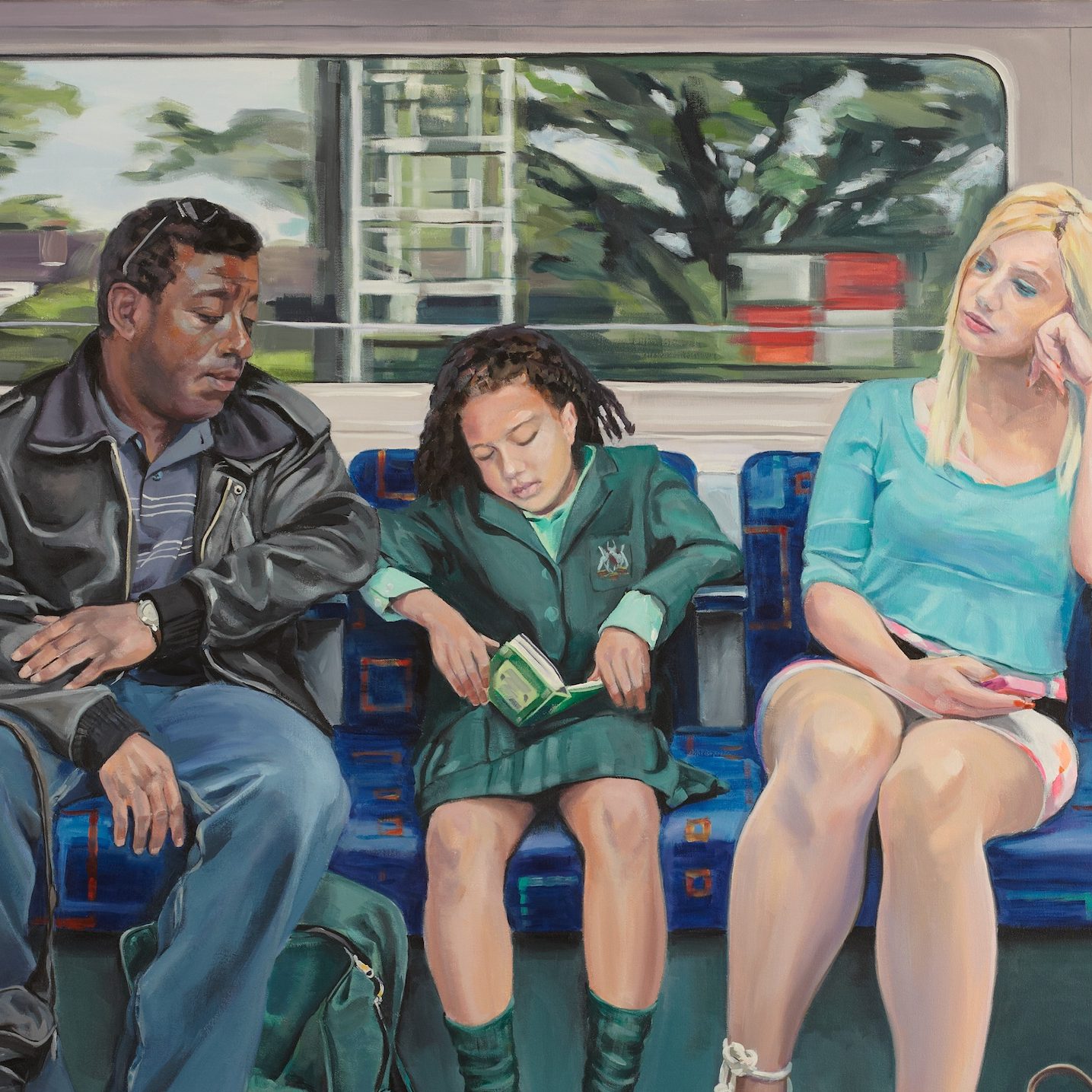 The London Underground is the great social equaliser and leveller – through which individuals of all classes, creeds, occupations and races travel day and night. For a visitor, time spent in the Tube is an education in its own right – in the culture of the city, its many pursuits (you learn a lot by just looking at the variety of ads and announcements on display). Unsurprisingly, the network is particularly attractive to artists (see the work of photographer Stephen Flounders and the painter-printmaker Gail Brodholt).

Driven by – what he calls – a “ridiculous attempt to paint every sort of person in London”, artist Ewing Paddock took to the Tube in 2009 for it seemed to him “just the ideal setting” for the project.

“In the last few decades London has become one of the most diverse places on earth,” writes Ewing, “and this is even more true of the Underground – the whole world is down there, all squashed up together. I’ve tried to reflect that in my paintings.” (I published a post on a recent book by British architecture critic Rowan Moore that examines the global character of London just last month.)

“The great thing was that everyone completely got the concept of people-watching, and I was carried along by the enthusiasm of others for the three years it took to make the paintings,” continues Ewing. “People also started looking for stories in the pictures, which I found very intriguing as I hadn’t given this much thought initially. In retrospect, I think it’s the most interesting thing about the whole project.”

Three years of intense and absorbing work resulted in 25 large canvasses, depicting over 70 individuals – party-goers, officer-goers, multi-ethnic kids, policewomen, readers, pregnant women, lovers, lonely hearts…All the paintings were exhibited at Bankside Gallery (next to Tate Modern) for two weeks in July 2013 – this was Ewing’s own tribute to the 150th anniversary of London Underground. Over 3,500 visitors saw the show and several paintings, prints, catalogues and cards were sold. The remaining paintings as well as replica prints on canvas are still available.

Ewing graduated from the London College of Printing in 1967 and enrolled in a life-painting class at the Working Men’s College, run by Malvern Hostick in 2003. His first artistic influence, he says, was his grandfather William Paddock (1871-1925), a fine painter, draughtsman and graphic artist. Born in Bristol and brought up in Scotland, William Paddock was Senior Art Master at University College School, London. An admirer of Velasquez and also Whistler, he exhibited in Edinburgh and London (twice at the Royal Academy). He loved open-air landscape painting, and especially depicted the area around the village of Bledlow, Buckinghamshire, where the family had friends.

One thought on ““EwTube”: Ewing Paddock Paints Portraits of People on the London Underground”