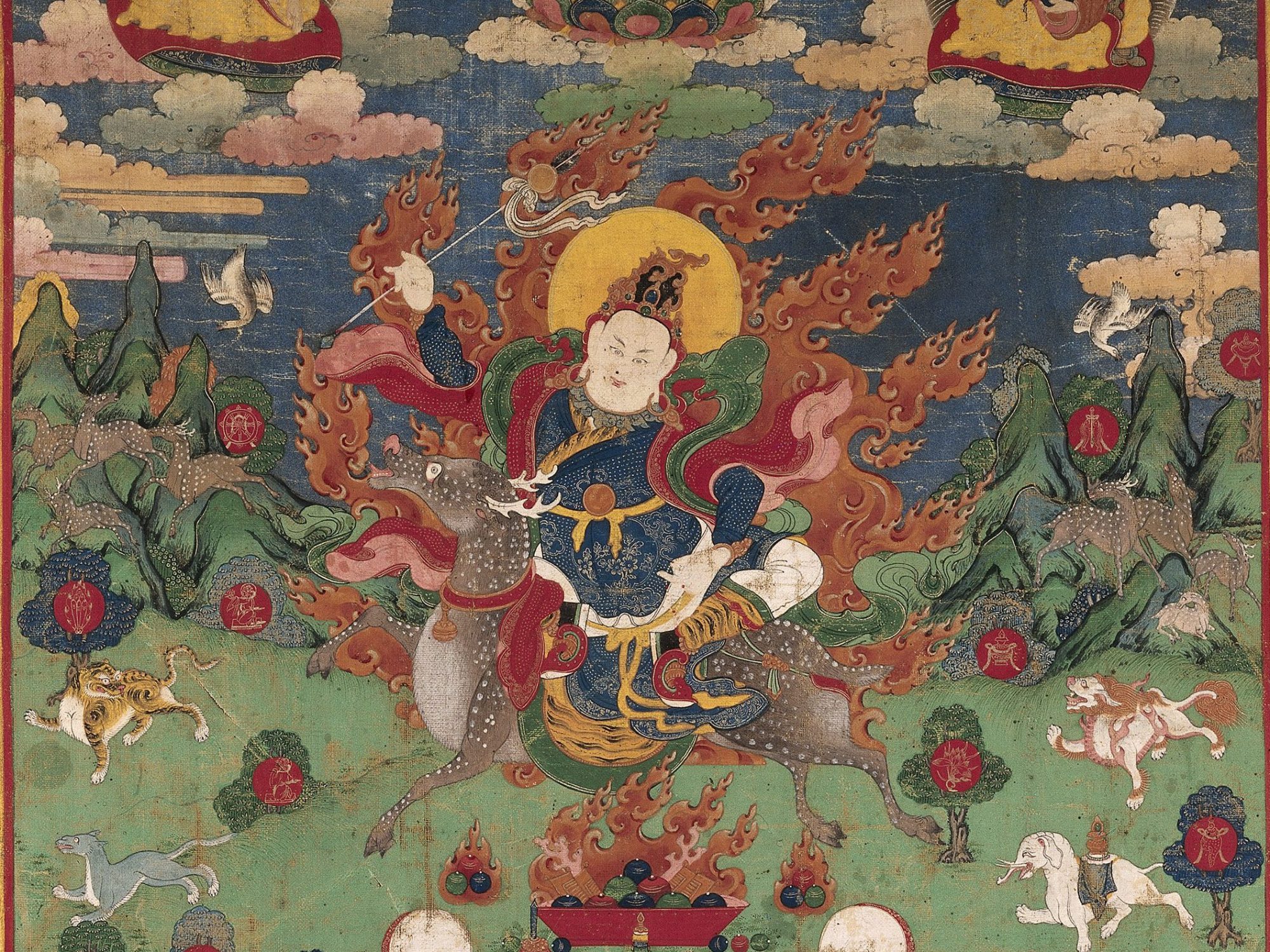 Last week, I discovered that Mongolian literature is defined by “three peaks”: The Secret History of the Mongols, the Epic of Jangar and the Epic of King Gesar. I found an interesting version of the last one: The Song of King Gesar by Tibetan writer Alai (born 1959) translated by scholars Howard Goldblatt and Sylvia Li-chun Lin (of the University of Notre Dame).

The epic itself is Tibetan in origin and goes back to the 12th century. It has been sung widely in Central Asia and passed orally from one generation to the next. The narrative revolves around the cultural hero Gesar – son of the deities, who is sent to earth, to the land of Gling (or Ling) to rid it of demons. In its role and its cultural importance, the epic could be compared to the Odyssey, the Iliad, the Ramayana and the Mahabharata.

As I was reading Alai’s retelling, I certainly found the story confusing, for it spans thousands of years. And this version particularly goes back and forth from ancient times to modern-day Tibet (equipped with buses and radios). Here a humble shepherd called Jigmed is chosen to tell the story to the masses and his mind is filled with visions of old battles.

Despite the puzzling course of events, the epic is pretty entertaining – with mountain gods, beautiful princesses, wise lamas, shrewd merchants, anyone, everyone. The past, present and future are all linked and people walk in and out of each other’s dreams. The depictions of landscape – mountains, valleys, clouds – are too lovely. There is a great geographical awareness in the story – Persia to the west, China to the east, India to the south, desolate plains to the north. It is insisted that “Gling” is not the whole world nor Buddhism the only belief system in Heaven.

Heaven is an omniscient and omnipotent realm. It is full of deities but ruled by a Supreme Deity – who is the final cause of every effect, formless but for his breath (very much like the Biblical God). The hero of the epic, who is sent to Gling by the Supreme Deity, is known by different names – Thosba Gawa, Gesar and Joru. On earth, as a human, he must learn to encounter and live with misery and suffering. Upon the completion of his mission, he must ride back to Heaven (he has a special celestial horse).

There were two themes that I found specifically interesting: the epic’s exploration of the nature of evil and its preoccupation with the issue of idleness. There are two kinds of demons – external forces and the ones that hide in the human heart. This tension reminded me of Stephen King. In a 2014 Guardian article, Alison Flood wrote that all his life King has:

It is a difficult subject to crack but it sure makes for terrific drama. Second, idleness. Every now and then, Gesar gets bored. He defeats enemies, drinks wine, has fun with women, and then has “nothing to do”. In periods of peace and prosperity, he just doesn’t know how to spend his time. There’s no one to chase, no one to run from – the world, in a way, comes to a standstill. Action and activity emerge only when there is some disturbance, some conflict. This sounds a little pessimistic – as if we need pain and aggression and violence to survive and grow further in life – but still the subject gives you much to think about.

Check this book out if you are a curious and patient reader. It will open a whole new world.

Joru talks to Brugmo, a great beauty and his consort:

“Did you really come from Heaven?”

Joru looked up at the sky. “That is what they tell me.”

He waved his hand, and the celestial soldiers made themselves visible, some in white helmets and armour, others in gold. Their weapons glinted in the light and the red tassels on their helmets fluttered in the wind. Joru waved again and they faded into the clouds.

“If you did not, my celestial powers would vanish.”

When Metog Lhartse [Joru’s human mother] finally caught up with them, they were entwined like a pair of geese. She wept as she spoke: “My children, let me be the first to wish you happiness.”

Gesar’s palace was filled with rare treasures from all over the world. Temples, houses, workshops and shops rose up around the palace, like mushrooms after summer rain. The capital city was now called Tagste khar and its fame travelled far and wide. Girls learned to weave and embroider from their mothers, while the young men, dressed in purple robes, used stone tablets to practise reading, writing and reciting the sutras with teachers in the temples. The scholars named this situation ‘prosperity’.

While Gesar enjoyed the affection of the consorts in his palace, he often set out by himself to see the country, and what he saw could be summed up in a word created by scholars to describe a situation in which nothing happened: ‘stability.’

Of course, he could not stop wolves eating sheep or people falling sick. Neither did the idea of leaving this world enter his head when he encountered old age, sickness and death – he was not from this world, so how could he leave it? The monks came into the palace to spread their teaching, and some even tried to instruct the king, although they knew that he had no need for their counsel. But ruling a prosperous, stable country had not been part of the original plan, and Gesar would sometimes wonder if it was time for Heaven to recall him. It seemed he had accomplished what Heaven had sent him to do and now had nothing with which to stave off idleness.

This thought, of course, was immediately known to the Supreme Deity, who said that after humans solve one problem they create another, and there is no end. It seemed that Thosba Gawa had contracted the human affliction.

“Then why not recall him?” someone said.

“Not yet. Since he complains about peace and idleness, let us find something for him to do. We will have to ask Lhamin Dagmo [Gesar’s celestial mother] to go to the human world once more.”