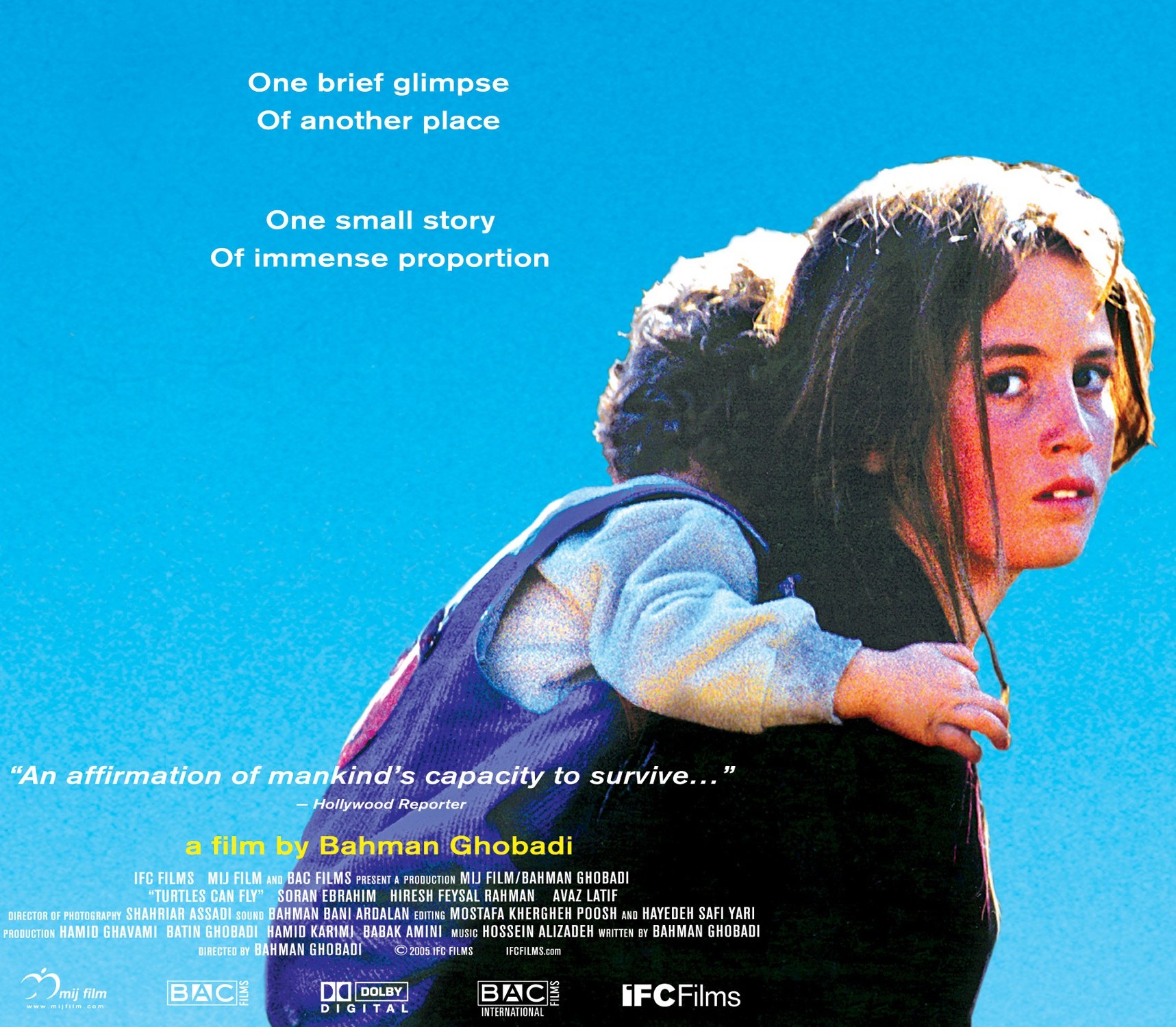 The first film to be made in Iraq after the fall of Saddam Hussein, Turtles Can Fly (2004) is a heart-wrenching yet splendid tale of displacement, trauma and survival. Directed by the Iranian-Kurdish filmmaker Bahman Ghobadi (born 1969) – who has, till date, made six feature films and several short films – the movie is set in a Kurdish refugee camp in the mountainous terrain of the Iraqi-Turkish border and begins just on the eve of the 2003 U.S. invasion of Iraq.

The principal cast members of Turtles Can Fly are children and adolescents who have been prematurely robbed of innocence. Satellite is an industrious but cunning thirteen-year-old whose job is to fix dishes and antennae so that the camp can learn about the war. He also oversees operations related to minesweeping. Agrin, Satellite’s object of infactuation, is a perpetually silent and sombre girl. Hengov is Agrin’s clairvoyant disabled and immensely considerate brother. Riga is a toddler, who at first, appears to be the Agrin’s and Hengov’s sibling but, as is later revealed, is Agrin’s child, born after her rape by Iraqi soldiers in her native village. Adored by Hengov, he is severely disliked by his mother, for whom he is an irksome reminder of her tainted and painful past.

Ghobadi was prompted to make a movie with real people as “superstars” and with Bush and Saddam as “extras” in the background when he visited Baghdad from Tehran in the spring of 2003 (two weeks after Saddam’s fall) with a small video camera. Moved, he later went back with a professional camera. In a 2005 interview on ABC, he explained:

I didn’t have a script. I had only written about 20% of it. I went there knowing that I had to quickly make a film in the situation that existed in Iraq at the time. In two, two and a half months, with five cars and five people including myself, each of us had a small video camera, we searched all the northeastern area of Iraq. Several towns and villages, and the roads, both to find actors and locations and to complete the script…Along the way I saw thousands of children and each was better than the other. I had so many choices. I just picked these ones. They were all talented. They were all amazing. If I wanted a child with no hands, in that border region I could find a thousand children who had lost their hands and feet walking on the mines…It was both easy and hard, but in the end, what I want to tell you is that I enjoyed very much the whole process of making this film, especially finding the actors.

Regarding the political temper of the film, Roger Ebert, the American film critic, opined:

You assume the movie is a liberal attack on George W. Bush’s policies. Not at all. The action takes place just before the American invasion begins, and the characters in it look forward to the invasion and the fall of Saddam Hussein. Nor does the movie later betray an opinion one way or the other about the war. It is about the actual lives of refugees, who lack the luxury of opinions because they are preoccupied with staying alive in a world that has no place for them.

Others have, alternately, maintained that the film clearly opposes war, but gently, without dogmatic fervour. It is, writes Michael Howard of The Guardian, “an anti-war movie without slogans”.

Ghobadi possesses the impressive ability of exacting spectacularly powerful performances from non-professional actors, and that, with minimal equipment over very short spans of time. Turtles Can Fly is not exactly a happy film but it is far from defeatist (as can be surmised from the title). Chaos and sorrow are punctuated by interludes of fun and humour. Overall, the film is a brutally honest documentation of the impact of conflict and tyranny on concrete, individual human lives. The stories it sets out to tell one never gets to hear on television news channels or newspapers. There, war is represented in an incomplete and reduced form – as statistics of the dead or abstract ideological debates.

Watch the trailer of Turtles Can Fly below:

In this interesting video, Ghobadi talks about growing up, his fascination with cinema and the many challenges faced by Middle Eastern artists:

The Cinema of North Africa and the Middle East (2007) by Gönül Dönmez-Colin (ed.)

Close Up: Iranian Cinema, Past, Present and, Future (2001) by Hamid Dabashi