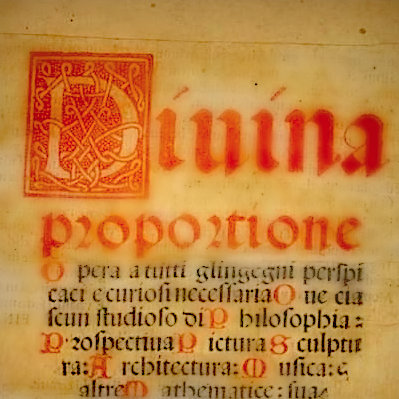 In 1498, the Italian mathematician and Franciscan friar (a celibate member of the Catholic religious order founded by St. Francis of Assisi) Luca Pacioli – who is called “The Father of Accounting and Bookkeeping” – composed a book called De Divina Proportione (“On the Divine Proportion”) which was illustrated by the great Renaissance polymath Leonardo da Vinci.

Humans have been aware of the Golden Ratio for at least 2400 years. It is found in the patterns of nature. Architects and painters have incorporated the number into their works to make them aesthetically pleasing (among them Le Corbusier and Salvador Dalí). In his 2002 book The Golden Ratio: The Story of PHI, the World’s Most Astonishing Number, the Israeli-American astrophysicist Mario Livio writes:

Some of the greatest mathematical minds of all ages, from Pythagoras and Euclid in ancient Greece, through the medieval Italian mathematician Leonardo of Pisa and the Renaissance astronomer Johannes Kepler, to present-day scientific figures such as Oxford physicist Roger Penrose, have spent endless hours over this simple ratio and its properties. But the fascination with the Golden Ratio is not confined just to mathematicians. Biologists, artists, musicians, historians, architects, psychologists, and even mystics have pondered and debated the basis of its ubiquity and appeal. In fact, it is probably fair to say that the Golden Ratio has inspired thinkers of all disciplines like no other number in the history of mathematics.

In De Divina Proportione (composed in Milan, first printed in 1509), Pacioli and Leonardo apply the Golden Ratio to architecture, alphabets, geometric figures and structures. Perspective plays an important role. Samples from the book are added after the portraits below. Just how the Golden Ratio is applied to the illustrations – those with limited knowledge of mathematics may find it hard to understand.

A scanned version of the entire book can be found here and a facsimile is available on Amazon.

Featured: Screenshot of a page from the scanned version uploaded by Stevens Institute of Technology (New Jersey) on ISSUU.