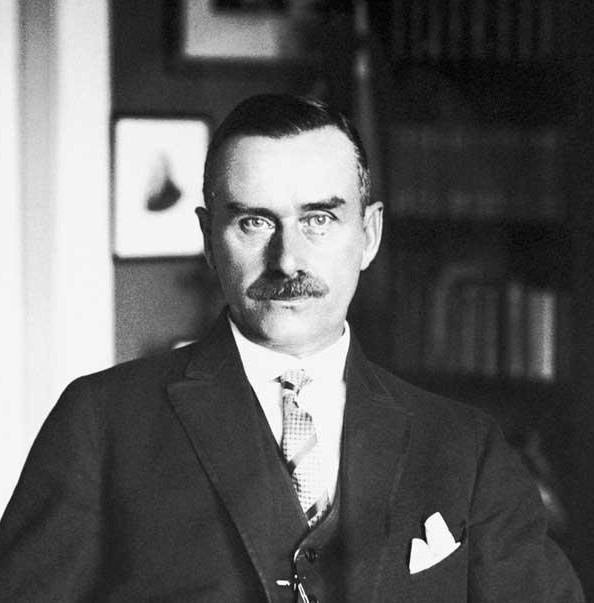 She softly stroked the short-cropped hair at the back of his head with one hand. “My little bourgeois!” she said. “My handsome bourgeois with the little moist spot. Is it true that you love me so much?“

Thrilled by her touch – on both knees now, head thrown back, eyes closed – he went on, “Ah, love, you know. The body, love, death, are simply one and the same. Because the body is sickness and depravity, it is what produces death, yes, both of them, love and death, are carnal, and that is the source of their terror and great magic! But death, you see, is on the one hand something do disreputable, so impudent that it makes us blush with shame; and on the other it is a most solemn and majestic force – something much more lofty than a life spent laughing, earning money, and stuffing one’s belly – much more venerable than progress chattering away the ages – because it is history and nobility and piety, the eternal and the sacred, something that makes you remove your hat and walk on tiptoe. In the same way, the body, and love of the body, too, are indecent and disagreeable; the body’s surface blushes and turns pale because it is afraid and ashamed of itself.

But at the same time it is a great and divine glory, a miraculous image of organic life, a holy miracle of form and beauty, and love of it, of the human body, is likewise an extremely humanistic affair and an educating force greater than all the pedagogy in the world! Ah, the ravishing organic beauty, not done in oils or stone, but made of living and corruptible matter, full of the feverish secret of life and decay! Consider the marvelous symmetry of the human frame, the shoulders and the hips and breasts as they blossom at each side of the chest, and the ribs arranged in pairs, and the navel set amid the supple belly, and the dark sexual organs between the thighs! Consider the shoulder blades shifting beneath the silky skin of the back, and the spine descending into the fresh doubled luxuriance of the buttocks, and the great network of veins and nerves that branch out from the trunk through the armpits, and the way the structure of the arms corresponds to that of the legs. Oh, the sweet inner surfaces of the elbow and the hollow of the knee, with their abundance of organic delicacies beneath the padding of flesh! What an immense festival of caresses lies in those delicious zones of the human body! A festival of death with no weeping afterward! Yes, good God, let me smell the odor of the skin on your knee, beneath which the ingeniously segmented capsule secretes its slippery oil! Let me touch in devotion your pulsing femoral artery where it emerges at the top of your thigh and then divides farther down into the two arteries of the tibia! Let me take in the exhalation of your pores and brush the down – oh, my human image made of water and protein, destined for the contours of the grave, let me perish, my lips against yours!”

When he had finished speaking, he did not open his eyes; he remained just as he was – his head thrown back, his hands stretched out before him, still holding the little silver pencil – quivering and swaying there on his knees.

She said, “You are indeed a gallant suitor, one who knows how to woo in a very profound, German fashion.“

10 thoughts on “Thrilled by Her Touch”