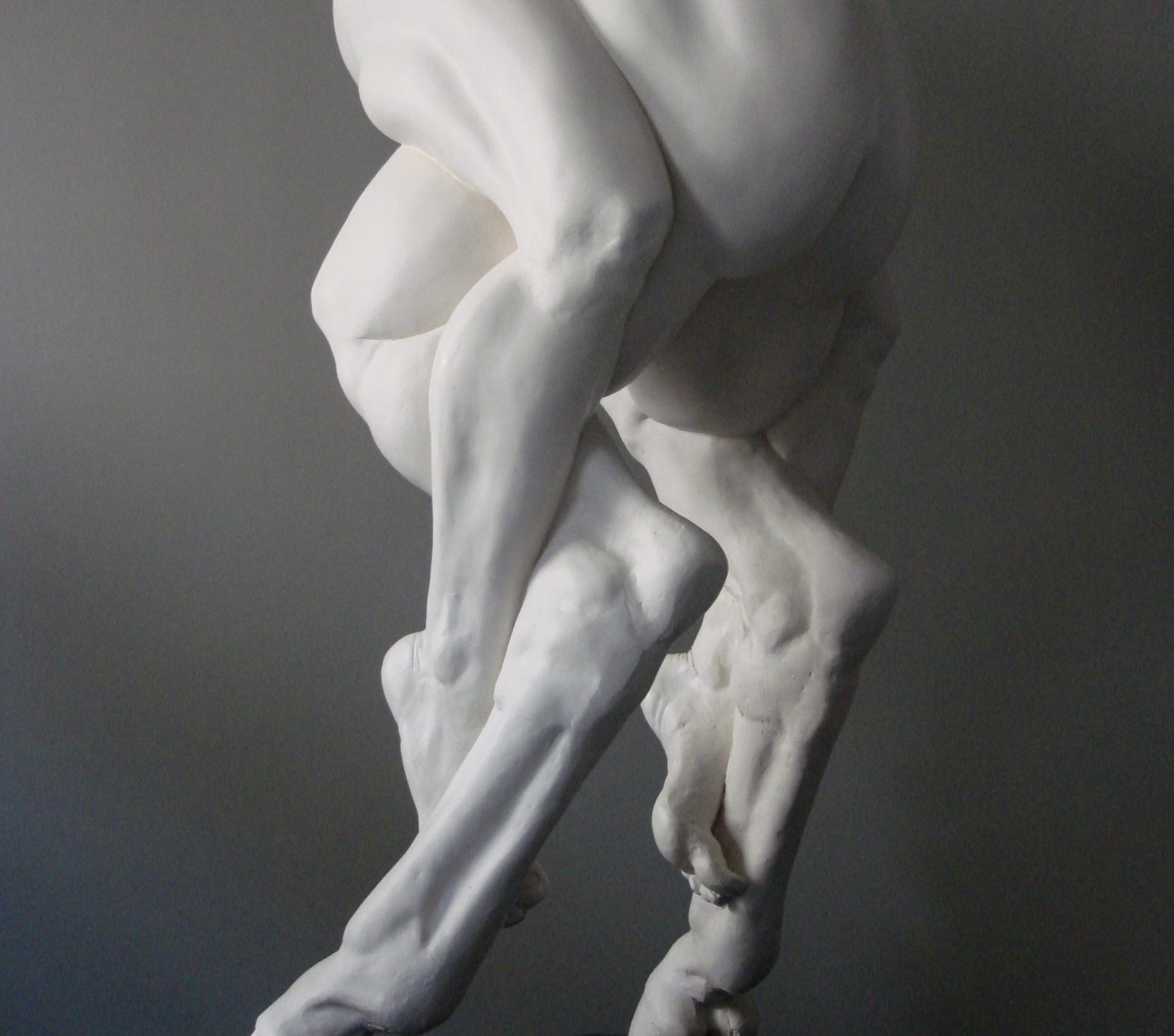 Based in Meulebeke—a municipality in the Belgian province of West Flanders—sculptor Greet Desal has been studying the forms found in nature for several years. Her practice depicts animal and human bodies—white, naked, primal—that often mingle with plants, furniture and architecture. Under this representation of physical frames and characteristics lies a layer of acute and dynamic “psychological questioning”.

Through her art, Greet exposes the viciousness of human pride and self-regard, highlights the suffering of animals, dissolves ranks and reveals the interconnectedness of earthly inhabitants big and small.

Here she discusses her approach to work and the issues that disturb her.

I found it interesting that on your site, you don’t introduce yourself and your work through explanatory paragraphs. Instead, you have put together a set of words in multiple languages. How does this reflect your way of thinking and creative practice?

I usually don’t feel the need to talk about myself, my work should do that job. I always have a problem with talking in sentences. A sentence undermines the layered feeling which I reflect in a piece—so I have talked in images for an introduction. By indicating words, I try to create an atmosphere for the visitors of my site. The final interpretation, I leave to them. You could compare this with an abstract painting where the colours and brushstrokes let the spectator arrive at their own meaning.

“Democracy” really made me pause and think. It is an odd mixture of a pillar and a human. My first reaction was—slavery, forced labour…how the great monuments of our civilisations are built upon the ill-treatment of the poor and vulnerable working class. How did you get the idea for this sculpture?

You have read the work well. If you take a good look at it you’ll see that the crooked pillar (democracy) is kept standing by one leg supporting the other. Thereby, the other leg partly crushes the first one. I feel nothing for hierarchy, of any kind. Not between people and not between man and other specimens on this planet. To me, nothing is above anything else. More and more, I think, the core of my work is to pull down our pretension of being a nobler, higher kind. Master and Servants shows an upper class lady whose skin is covered with the fur (protection and dignity) of the skinned rabbits that adorn her breast. She has taken it all. Sleeper’s Peace, however, is a utopian work; humans and animals in an entangled sleeping position. Sleeping means peace; mankind should fall asleep for a while, so that nature could be restored.

When I saw “United State 1”, I was disturbed but also felt that what you were communicating was something pretty obvious that I had always known. Here, you mix the body of a man with that of a hoofed creature. You simply make us aware of the fact that our human side exists above a more basic animal side. Would you like to add something on this subject?

On my site, there is an animation film that clarifies the idea behind this work. Man dominates the horse when they meet, he absorbs it and eventually the fused bodies are walking backwards out of the scene. The horse had to give in. Where man passed, the grass disappeared. We are dominant animals struggling with our cultivated side.

Your entire series “United State”, you say, is a search for “connection” among different bodies. You believe there is a single truth that we can uncover when we take the average of several species. What other pieces have you created for this collection?

When I made that series, I was searching for the sculptural proof that all species are part of one order. It was a kind of game to me, a puzzle. United State II is a mosquito crane fly whose body is partly human, partly dog and partly plant. The long body area is the pistil of a flower. The resemblance with a human phallus is easily recognisable.

“Tired Mommies Monument” is rather cute. Are you a mommy yourself?

No, I consciously chose not to have children. But I have great respect for women who succeed to combine motherhood with their job and ambition of any kind. The boring truth is that even in our ‘modern’ Western society, most women are still taking the housekeeping tasks to their account. Out of respect I made an absurd monument to them; an old leg with varicose veins and sucked out breasts above it. I could make an animation on it; the legged thing hopping forwards to escape a bunch of hungry mouths rolling behind it.

Why is it “Our Daily DEAD”?

‘Our Daily Dead’ is my version of the Pietà. In Christianity, Jesus, as a human is presented as the ultimate martyr. To me, the martyrs par excellence are the animals who are daily and massively farmed and slaughtered to meet our need of meat. In ODD, Christ is replaced by a skinned deer lying on a chair draped with a tablecloth. The hanging arm refers to the figure of Christ. Our “way of eating” is the creator—Maria the mother—of the suffering animal. Presenting a human as the martyr, to me, is proof of our ubiquitous pride.

What attracts you to meerkats?

Nothing really, I just think it’s a funny animal.

Are you preparing for any exhibition right now?

I never really prepare for an exhibition in the sense that I make work especially for one exhibition. I make my art because I feel the need to make it and then it may or may not be taken into an exhibition. Right now I am working on a big relief inspired by an engraving of Hans Witdoeck. He was an assistant of Rubens. The engraving shows De kruisoprichting (The Elevation of the Cross) of Rubens in one piece; the painting itself is a triptych. In my version, the scene shows a kind of apocalyptic image of the degeneration of man where selfishness prevails.

No Q & A is complete without my asking the artist being interviewed to name his/her favourite creative people. Who are your best sculptors, writers, painters, filmmakers, musicians, etc., etc.?

Louise Bourgeois is a great example to me. The first time I saw her work, I was shocked at how relatable it was to me. This was during a period when I was using art in a therapeutic way. The absurd character of the paintings of Bosch. The virtuosity of Rubens, the psychology of Ron Mueck, the power of Michelangelo, the baroque of Bernini, the anatomy of Constantin Meunier, Godspeed You! Black Emperor, Rufus Wainwright, Sigur Rós, Anouar Brahem, Billie Holiday, Arvo Pärt, Melanie de Biasio, Elbow, Woody Allen, David Lynch, Coen Brothers, Martin Scorsese, Tarantino, Christopher Nolan…

Do Belgian history and culture inform your art? If yes, in what way?

History…not really or not that I am aware of. But I notice that my Catholic upbringing does. When I was a child, I went to Catholic schools and had to go to church. I didn’t understand most of the things the priest said in front; he was talking to me in riddles. I have the same feeling when I hear politicians talk. Religions as we know them, connect locally but divide at world level. While I had to sit there, I studied the paintings and sculptures that adorned the church. In a lot of my works, I use the language of Catholicism to tell about my faith—the belief in nature. If mother earth were the god of us all, we could give her the much needed respect she needs right now.

Do you have any autobiographic works?

Till my thirties, I mostly used art to deal with certain things and as a mirror for myself. I think this is an important task an artist must accomplish; some artists need a whole life for that. I gradually had room to see the things around me and this also crept into my work. But sometimes, the need for self-reflection comes up again. For example, in Eros and Thanatos, a small ceramic self portrait showing the duality between my male animal drive and my female human neurotic side. In A Private Party I show myself shielded with a party hat that is shattered with bird shit. A lump of clay in one hand and the other holding the string tight with the middle finger. It’s a glorified fuck you to the outside world from which I tend to withdraw. I think about myself as being a positive pessimist.