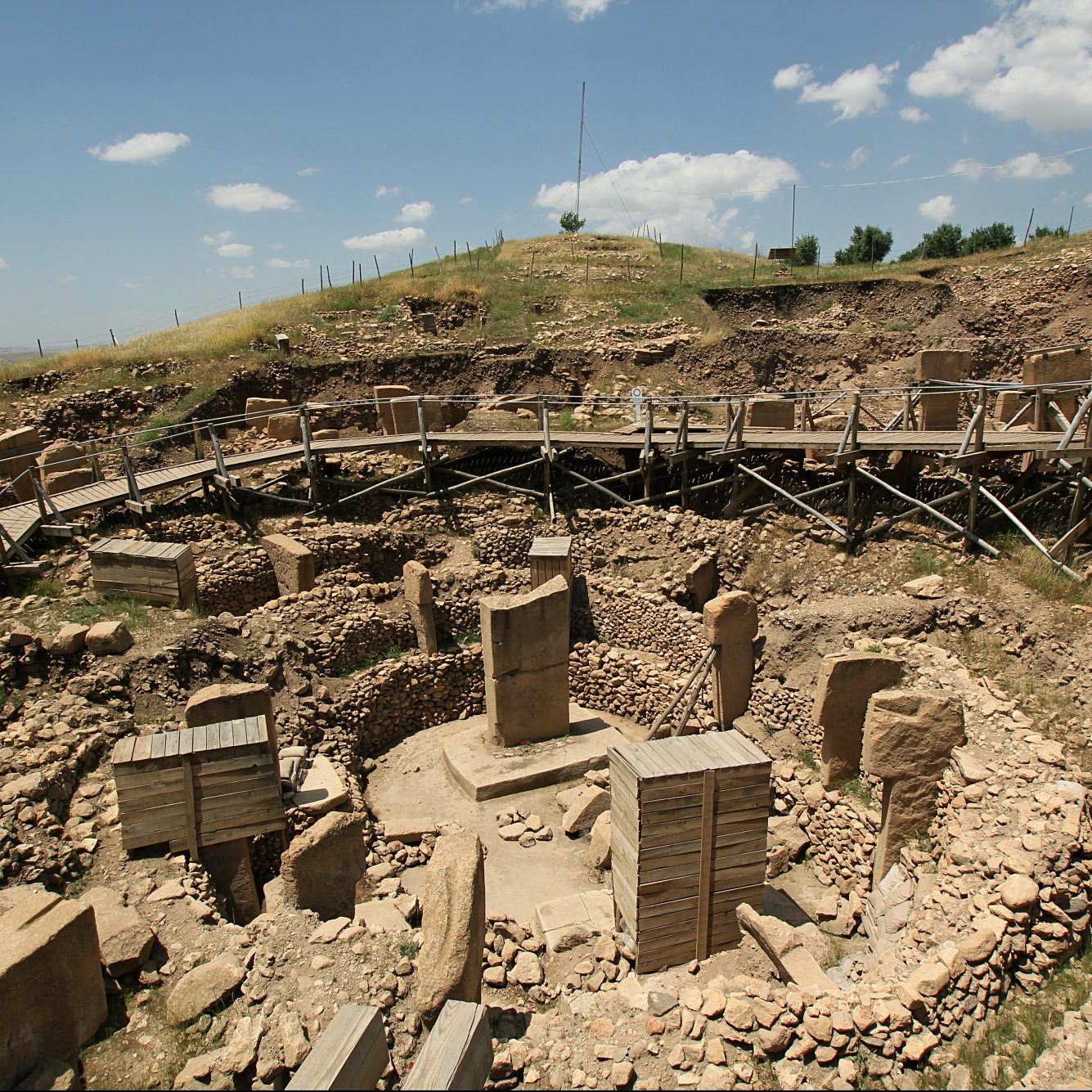 I first read about the archaeological site of “Göbekli Tepe” in the outstanding Sapiens: A Brief History of Humankind (2015) by superstar Israeli historian Yuval Noah Harari. In Part Two (“The Agricultural Revolution”) Chapter Five (“History’s Biggest Fraud”), there is a section called “Divine Intervention” that acts as a challenge to the main theme of the chapter. How did humankind go from foraging to farming? When it comes to this particular shift in human history, scholars prefer applying a purely materialist perspective – we discovered and domesticated wheat or wheat discovered and domesticated us. Then we settled, we erected our civilisations and cultures, built our cities with their many monuments – houses, baths, palaces, tombs and temples…

But Harari is open to an alternative. What if this great event was occasioned not by biological/corporeal need/ambition but by some kind of intellectual revolution or spiritual awakening? Perhaps Sapiens were consciously willing to make their lives harder, more complex? The author admits that “it is difficult to prove that preliterate people were motivated by faith rather than economic necessity. Yet, in some rare cases, we are lucky enough to find telltale clues.” Then he moves to a discussion of Göbekli Tepe (literally “Potbelly Hill”) in the Southeastern Anatolia Region of modern-day Turkey – a site that archaeologists began to excavate and take seriously around 1995. The region had been first surveyed (and dismissed as unimportant) in the 1960s by scholars from the University of Chicago.

In the oldest stratum they discovered no signs of a settlement, houses or daily activities. They did, however, find monumental pillared structures decorated with spectacular engravings. Each stone pillar weighed up to seven tons and reached a height of five metres. In a nearby quarry they found a half-chiselled pillar weighing fifty tons. Altogether, they uncovered more than ten monumental structures, the largest of them was thirty metres across.

Archaeologists are familiar with such monumental structures from sites around the world – the best-known example is Stonehenge in Britain. Yet as they studied Göbekli Tepe, they discovered an amazing fact. Stonehenge dates to 2500 BC, and was built by a developed agricultural society. The structures at Göbekli Tepe are dated to about 9500 BC, and all available evidence indicates that they were built by hunter-gatherers. The archaeological community initially found it difficult to credit these findings, but one test after another confirmed both the early date of the structures and the pre-agricultural society of their builders. The capabilities of ancient foragers, and the complexity of their cultures, seem to be far more impressive than was previously suspected.

The structures of Göbekli Tepe had no obvious utilitarian purpose – that is, they don’t seem to be slaughter-houses or places of shelter from rough weather and wild animals. There is no evidence. This leaves us with the theory that they had a mysterious religious or ideological role. The site was probably a location where different tribes and bands got together to co-operate over a period of time.

From many years, geneticists have been tracing the origins of domesticated wheat. Recent discoveries indicate that at least once domesticated variant, einkorn what, originated in the Karacadağ Hills – about thirty kilometres from Göbekli Tepe.

The point is essentially this – first came the temple, then the city, not the other way round. This phrase (“Zuerst kam der Tempel, dann die Stadt”) was used by German archaeologist Klaus Schmidt (1953–2014) who directed the excavation of the site from 1996 to 2014. He added: “I think what we are learning is that civilization is a product of the human mind.” Stanford-based British archaeologist Ian Hodder echoed Schmidt, remarking – “Göbekli Tepe changes everything.”

Can we know anything about the cosmology of the group at Göbekli Tepe? Do the architecture and symbolism of the temple tell us something about the worldview of these people? If you search for “Göbekli Tepe”, you’ll find a flood of New Age-y pseudoarchaeological writings on the subject, some of them even mentioning UFOs and aliens – I’m generally skeptical of that kind of stuff. There’s one excellent peer-reviewed article though – from the Romanian scholar Dragoş Gheorghiu of Bucharest National University of Arts – that attempts to read the signs of the structures in light of their immediate environment; the drawings and arrangements have something to do with the nearby sources of water and the life in and around it. The paper is titled “A river runs through it: The semiotics of Gobekli Tepe’s map (An exercise of archaeological imagination)”. Here are excerpts:

The radial structure of the enclosures infer a possible link between the geometric shape of the landscape (under the shape of mandala plans) and rituality. When studying the plans of religious buildings along human history one can observe a direct link existing between the geometry of the plans and the structured human actions, i.e., the rituals. At Göbekli Tepe geometry structures, in an analogous way, the movement of animals. The current interpretation of the round enclosures as sanctuaries seems justified by the reading of the iconography as a cosmogonic map, which would relate the local community to the surrounding landscape and the cosmos.

We will never know if the map represented the geographic reality, or a mythical realm of the hunter-gatherers, but whichever this reality was, a river ran through it.